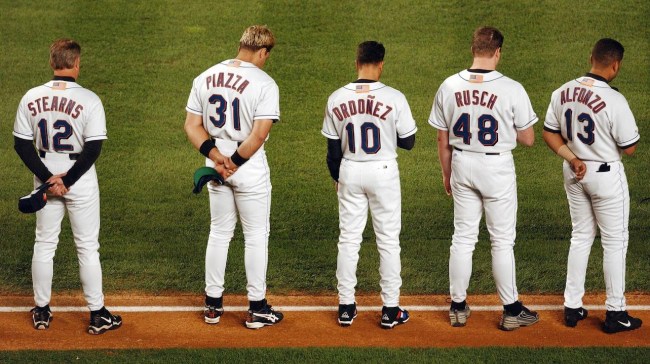 No matter what the New York Mets ever do or how many games they ever win, they will always be New York’s little brother of a baseball team.

But on September 21, 2001, the Mets were not only New York City’s team, they were America’s team.

The Mets — who were on the road when the Twin Towers came down on September 11, 2001 — returned home to Shea Stadium 10 days later with the unfortunate distinction of being the first professional sports team to play a game in New York City following the devastating terrorist attacks.

According to All-Star catcher Mike Piazza, the week following the 9/11 attack was such a whirlwind that he “can’t describe what it was like to come back and play” because he didn’t “remember any of it.”

And while Piazza may not remember, those who live in this city, especially Mets fans, do.

At the time of the September 11 attacks, I was just eight-years-old, and while I was not the feverish sports fan that I am today, the genesis of my sports fandom was beginning to build, especially for the Mets.

My father, who is from Queens — where Shea Stadium, and now Citi Field, is located — had season tickets with his brother, so we’d go to dozens of games a year. And while I didn’t necessarily care about the score at the end of the game — hell, if the Mets were losing, we’d occasionally cut bait in the 8th inning — I always reveled in going, as there was nothing better than soaking up the sun with my pops, housing hot dogs and ice cream as he put down a couple of cold ones.

Shamefully, though, I didn’t begin my life as a Mets fan, as I began to become a conscious person during the height of the New York Yankees’ late 90s dynasty. Naturally, being just a kid, I gravitated towards the winners. But, the year prior to the 9/11 attack, the Yankees played the Mets in the World Series, and I simply could not bear rooting against my Pops. So, the switch was made, and I’ve been a tortured Mets fan ever since.

Being a Mets fan is complicated — it takes commitment and a level of acceptance that things are going to go wrong more than they go right. In fact, most of my Mets memories are of the negative variety.

But not this one.

At home against their fierce division rival Atlanta Braves in the midst of a heated pennant race, the Mets were the first team to play in New York following the attacks, and therefore, were the first to usher a sense of normalcy back into the city.

That night, even though I was watching through a TV screen dozens of miles away, sitting next to my Dad as I would behind home plate all those years at old Shea Stadium, you could feel the raw emotion pouring out of the stadium.

Packed to the brim with first responders and families who had lost loved ones, that first Mets game back at Shea transcended sport to become something much more: a city-wide cathartic release. People wanted to feel normal again, but they just didn’t know how, and the Mets gave that to them and then some.

Heading into the bottom of the 8th, the Mets were trailing 2-1 to the Braves with their best player, All-Star catcher Mike Piazza, headed to the plate. If you had pitched such a scenario to Hollywood producers, they’d likely turn you away for writing a script that’s for too predictable. But on this night, everything and nothing was out of the ordinary.

And just like that, with one thunderous swing of the bat, Mike Piazza sent a baseball over the fence, and in doing so, finally sent New York City on the much-deserved road to recovery.

Even if it was for just a fleeting second, all those watching forgot about the ceaseless pain they had endured for the 10 days prior, and in that moment, realized that it was okay for them to feel normal again, to feel joy again — to feel that life will carry on.

While the Mets have long been known for their mistakes and mishaps, on this night, they were exactly what everyone needed. And for that, I’ll never forget them.