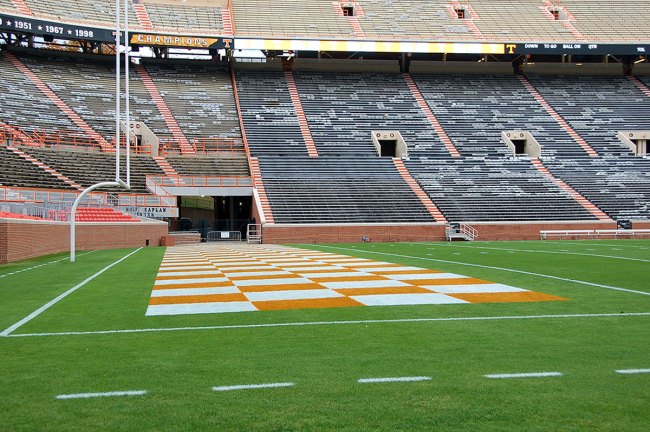 No. 6 Florida traveled to Knoxville, Tenn. on Saturday with hopes of keeping its road to the SEC Championship and potential College Football Playoff hopes alive. Prior to the game, the Gators were fired up as they went into the locker room and quite a few of them jumped up to tap the goal post in the far end zone before heading off of the field. One player in particular threw down a mock dunk and knocked the field goal crooked.

I think this goalpost is crooked. The angle of the cross bar should match that of the back line. It doesn’t. A Gator player did dunk on the post causing it to shake. Update, being fixed as I type it pic.twitter.com/WCubk1F6nB

The grounds crew came out to fix the problem prior to kickoff and managed to get it figured out because the game began on time. However, it could have gone very poorly.

Attempting to fix it now.

What would have happened if the entire field goal fell, or if they couldn’t get it straightened out? Would every possession have to be played toward the only functioning uprights? Would all field goal attempts require a pause in the game to move back toward the other side of the field? Is there an emergency goal post?

We won’t need the answers to these questions because the professionals got it back to normal, but it would have been a lot funnier if they didn’t. The Vols are huge underdogs against the Gators and the internet had jokes about the crookedness.

But apparently it’s not entirely level, which makes the questions about protocol even more prevalent.

Tn a case where a kicker hits one of the posts down on that end, what happens? For now, it’s just a funny pregame mishap, but chaos is just one shank from ensuing.