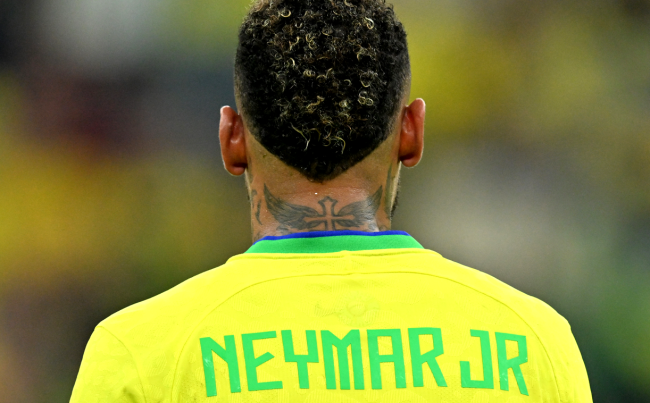 While Neymar is having a bit of a rough go at the World Cup, he will miss Brazil’s last group game because of an ankle injury, his doppelganger is having the time of his life in Qatar.

Fans of Brazil, however, thought they had a glimmer of hope that Neymar would play on Friday against Cameroon when they were shown video of Neymar walking around Doha by Fox Soccer’s Twitter account the other day.

UPDATE: we got got

Ankle looks good to me

Unfortunately for them, it wasn’t Neymar – something several soccer fans were quick to point out.

There’s no way you actually thought this was Neymar?

UPDATE: we got got

At least Fox Soccer had a good time with their Neymar goof.

Oh look, there's Neymar definitely in the stands at the Brazil game 😏😅 pic.twitter.com/HAwYh08Xz7

So who was that walking around Doha looking like the star from Brazil, complete with entourage and hangers-on?

Wait, who the heck is Eigon Oliver?

Well, he’s no stranger to soccer fans, boasting an eye-popping 907,000 followers (and counting) on Instagram.

That familiarity among the soccer crowd didn’t stop him from fooling Qatari security into giving him access to restricted areas of Stadium 974.

Neymar’s look-alike fooled the Qatari stadium security & got into restricted access on the pitch 😂😂😂
pic.twitter.com/75LNiCOMbK

It’s rather understandable how some people can get fooled. Oliver was wearing Brazil’s official tracksuit and Nike shoes, earrings identical to Neymar’s, carrying a Louis Vuitton bag, and even sporting a neck tattoo like the real soccer superstar.

Oliver may not be the real Neymar, but he is still living the life over in Qatar, getting mobbed by fans who obviously don’t know any better, looking to grab a selfie with him.

The media over there loves the guy too.

Interestingly, if any of those fans would have just checked the real Neymar’s social media they would have seen that he was in his hotel room while Oliver was at the stadium.

The real Neymar may not not only miss Brazil’s game against Cameroon, it’s looking very possible that he will be out for their game against Switzerland on Monday as well. Bad news for one of the World Cup favorites to be sure.

The fake Neymar, however, barring something terrible happening, will more certainly be in attendance at both games.