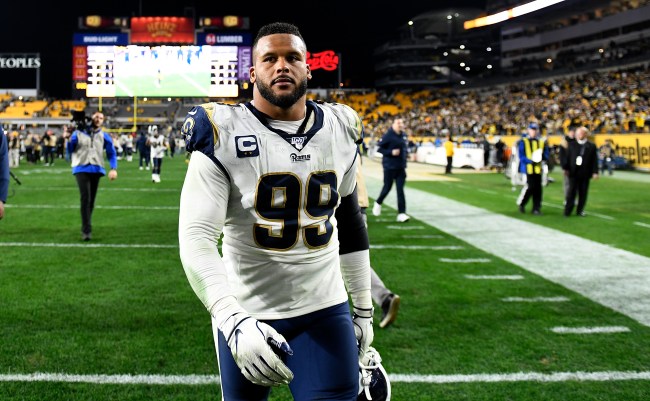 On Wednesday morning, KDKA’s Andy Sheehan shared a picture of a man with a swollen face who is accusing Donald of assaulting him last weekend.

‘
According to Sheehan, the man’s lawyer Todd Hollis will be pressing charges against Donald for the alleged assault.

Attorney Todd Hollis provided a picture to KDKA’s Andy Sheehan of a man who appeared to have a swollen eye and cuts on his face and said he would be pressing charges again the NFL star. Hollis says De Vincent Spriggs, who is the man in the photo, intends to file criminal charges against Donald for an alleged assault in the overnight hours of last weekend, April 10-11. It allegedly happened between 3-4 a.m.

The attorney says Spriggs will file the charges at Pittsburgh Police Zone 3.

Update: TMZ released the full list of allegations made by the man’s lawyer.

We just spoke with attorney Todd Hollis who spelled out the allegations against Donald — saying it all started when Spriggs accidentally bumped into Donald inside of a nightclub.

Hollis says both parties were asked to leave the club — and Donald got aggressive with Spriggs outside … ultimately attacking the guy.

Hollis says he has submitted a “formalized statement” to cops — and told us his client is seeking a criminal investigation into Donald.

As for the injuries from the alleged incident, Hollis says Spriggs suffered various lacerations that required 16 stitches — as well as a broken eye socket, broken nose and a serious injury to his arm. He also suffered a concussion and “severe trauma,” Hollis says.

Update: The Rams released a statement saying they are looking into the allegations made against Donald.

“We are aware of the reports regarding Aaron Donald. We are collecting more information and will have no further comment at this time,” the Rams said in a statement.