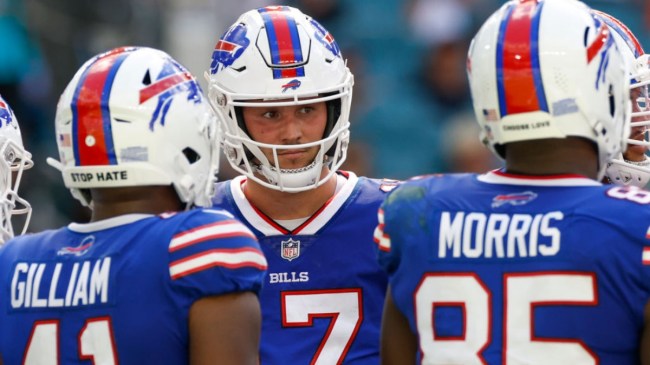 Over the first 2 weeks of the NFL season, there was no offense in the league that impressed like the Buffalo Bills.

In week 1, they scored 31 points against a Los Angeles Rams defense that led their team to a Super Bowl last season. In Week 2, they were even more dominant, shredding the Titans for 41 points in the first 3 quarters.

In Week 3, they were finally slowed down by the Miami Dolphins, only scoring 19 points despite 400 passing yards and 47 rushing yards from Josh Allen.

That game seemingly showed that despite spending a 2nd round pick on James Cook this year, the Buffalo Bills still have the same problem as the past couple of seasons. Their running game isn’t on nearly the same level as their passing attack.

NFL analyst and former league MVP Boomer Esiason seems to have a solution to this issue for the Bills. He believes that they could trade for Saquon Barkley before the trade deadline.

If Saquon Barkley continues to do what he’s doing … by the trade deadline, … that’s a serious thing that I think the Buffalo Bills would look at… Saquon is probably as good now as he’ll ever be in the NFL … why would the Giants keep him? If the Bills would love to have a top-end running back and give the Giants a second or a third-round draft pick, you’d have to consider it if you’re the Giants.

Saquon Barkley has carried a lackluster New York Giants offense through the first few games of the season, with his nearly 200 total yards against the Titans leading the way for their win and his performance against the Cowboys keeping the Giants in that game.

Adding him to the Bills offense would be a terrifying possibility for every defense in the league and if the Giants are selling at the trade deadline, he might not cost the Bills very much.

There’s just one thing that might stand in the way. The Giants could still see themselves as a potential playoff team at the trade deadline. They play one of the league’s weakest schedules this season and could conceivably have 5 wins at the trade deadline with home matchups against the Texans, Lions, and Commanders left on their schedule.

It looks like the Bills will have to hope Saquon keeps playing well, but not well enough for the Giants to win games.