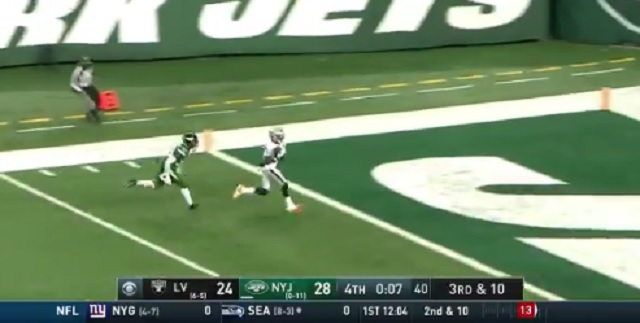 The NY Jets lost in bizarre fashion to the Raiders on Sunday and a large portion of NFL fans think the team tanked the game on purpose.

With 10 seconds left in the game and the ball at midfield, the Jets defense decided to blitz and ended up giving up a huge 46-yard TD to Henry Suggs in single coverage.

According to NextGen stats, the Jets were the only team this season to send 8 pass rushers in the final 30 seconds of a game.

The Jets are the only team to send 8+ pass rushers on a play in the last 30 seconds of a game this season.#LVvsNYJ | #TakeFlight

Raiders and Jets players were apparently stunned the defense would blitz at that moment.

Derek Carr: "I couldn’t believe they all out blitzed us. I was thankful."

Fans immediately questioned the Jets’ defensive scheme on the play and are calling for the league to investigate the Jets for deliberately losing the game in an effort to secure the #1 pick in the NFL draft.

The NFL needs to investigate the situation going on with the NYJ. That or eliminate worst record getting the top draft pick.

The Jets gave up back to back plays of someone getting behind the defense for an open TD when all you need to do is keep everything in front of you. Fixed

nfl has to investigate the jets, that tank looked too obvious

Goodell needs to investigate this. The Jets dropped THREE into coverage when they should’ve had 8 players standing on the goal line. You can’t tell me this wasn’t on purpose https://t.co/lUO38QAJvX

The @NFL should investigate the Jets for tanking https://t.co/pW92oSs1sB

Can the @NFL investigate the Jets for purposely tanking. What an embarrassing franchise