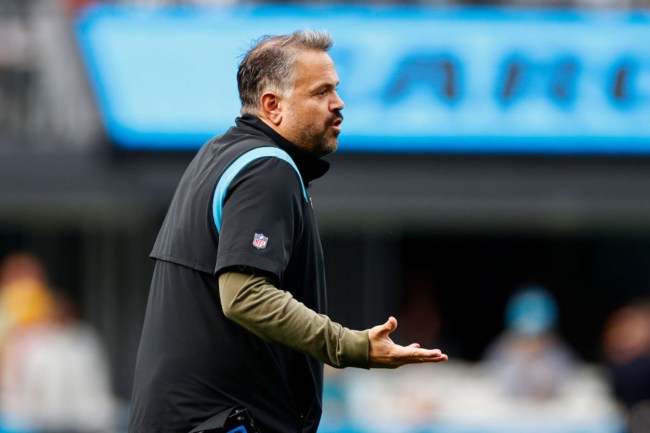 By far the most exciting thing that happens at the NFL’s Annual Meeting is when head coaches gather for a group picture. It’s a guarantee that at least one coach is going to stick out and catch some heat in the photo and this year that honor belongs to Carolina Panthers head coach Matt Rhule.

While your eyes likely go to Ron Rivera’s rather loud shirt in the middle of the photo, your attention likely next moves to Matt Rhule, specifically his pants.

Rhule – who signed a seven-year, $60 million contract in 2020 – showed up not only in an incredibly generic polo, but some outrageously wrinkled khakis.

How many you recognize…? pic.twitter.com/zjB5Bw6F4n

On the one hand, you have to respect how little Rhule cares about the state of his pants. On the other hand, this is a guy that makes millions of dollars per year.

Then again, New Orleans Saints head coach Dennis Allen showed up wearing a white belt which is easily the worst fashion choice of anyone in the picture.

NFL fans got all over Rhule for wearing wrinkled pants to the meeting:

we gotta get matt rhule some new pants https://t.co/0NXzLVdXc5

Matt Rhule looks like the large frat guy that was told he had to wear a collared shirt for parents weekend and is really upset about it https://t.co/0VDUD29jkS

Panthers coach Matt Rhule looks like the kid about to get picked last for dodgeball. https://t.co/GuXTBYivHQ

Judging by the wrinkles, these are Matt Rhule’s *favorite* pants and he wears them six days a week. pic.twitter.com/RCwzf7lvmP