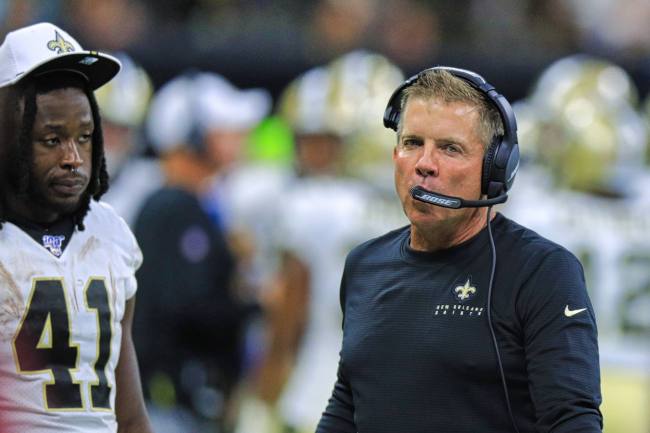 Alvin Kamara had a chance to do something special on Friday but for whatever reason Sean Payton didn’t give him the ball late in the game.

During the Saints-Vikings Christmas day game, Kamara scored five touchdowns and had a chance for a record-tying sixth TD late in the fourth quarter but the Saints decided to run the ball with QB Taysom Hill.

Update: Kamara was able to get his sixth TD later in the game but fans were mad he didn’t have an NFL record 7 TDs because of Payton giving Hill the ball on the goal line earlier in the fourth quarter.

What a day for Alvin Kamara. Throwing up the 6⃣ @A_kamara6 @Saints pic.twitter.com/1SgGPM9Spw

Fans weren’t happy with Sean Payton’s decision to run the ball with Hill instead of giving it to Kamara on that play.

Alvin Kamara, have a day. And just think, if not for Sean Payton's infatuation with Taysom Hill, Kamara could have been the first ever with 7 TDs. Alas. Still fun to watch NFL history. https://t.co/Cv0nPSNRao

Kind of upset Sean Payton didn’t give the ball to Kamara on the one yard line for his potential 6th TD. My man could’ve had seven and broke the #nfl record

That should have been seven.

Alvin Kamara really could have had seven rushing touchdowns but Sean Payton decided to give one to taysom hill. pic.twitter.com/Uk4C4yd4TQ