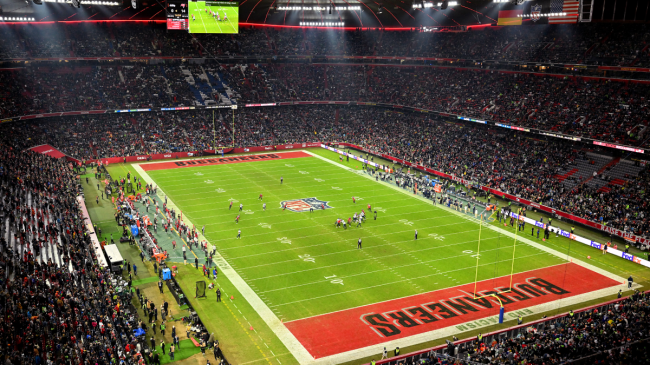 The NFL continues its march into Europe with Week 10 giving fans a matchup in Munich, Germany. We’ve already seen the league schedule contests across the pond with yearly games in London being added to the slate. Now, Roger Goodell and Co. are headed further East.

Now, this is far from the first NFL exposure seen in Germany. In fact, there was previously a developmental league in Europe, which was forced to shut down due to dwindling support from fans overseas (only the German teams were drawing consistent crowds). While NFL Europe had to call it quits, the league’s interest in global expansion did not.

Saturday’s matchup between the Bucs and Seahawks marked the NFL’s return to Germany, and by all accounts, it was a huge success. The game was an entertaining one, with Tampa Bay coming out on top in a 21-16 decision. Tom Brady, the face of the league, put on a show with a pair of touchdown passes in the win. It appears that he and his Tampa Bay teammates are eager to play again in Munich.

The action was enough to keep a sellout crowd riled up throughout the course of the game. Many around the NFL commented on the incredible scene, with those fans doing everything in their power to ensure the league returns to Germany next season.

The German crowd is fantastic

The stadium was rocking throughout all four quarters, but maybe the best scene of all had little to do with the game itself.

And yes, that Bavarian classic, “Country Roads,” sung with passion by the Munich crowd. pic.twitter.com/2c00o4bFVH

The crowd in Munich was heard belting out the familiar tune “Country Roads” by John Denver. This classic sing-along can be heard at stadiums and ballparks nationwide in the US, most notably at any West Virginia Mountaineer sporting event, but it’s apparently well-known overseas, as well.

All 70K fans in Allianz Arena sang in unison as John Denver’s voice rang across the loudspeakers. Many were quick to comment on the awesome scene on social media.

The crowd was fully invested in the NFL on Sunday morning. If this is a sign of things to come, those fans in Germany will have much more to cheer about as American football continues its path into Europe.