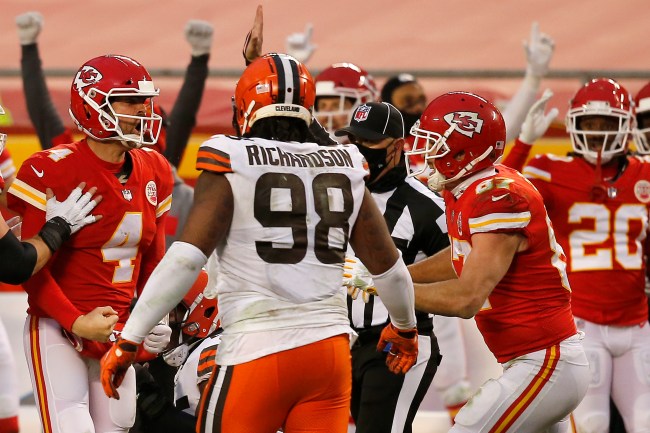 The NFL Divisional Playoff weekend was basically a can’t lose situation for the NFL no matter how it shook out, but Roger and his cronies have gotta be pleased with the results. Baker Mayfield and the Browns heading to Buffalo for the rights to a Super Bowl trip would’ve been wild from a fan perspective and crazy for ratings — yes, Baker’s boys are a draw — it’s just doubtful anyone in their right mind will be complaining about Patrick Mahomes vs. Josh Allen firing the ball over the field while we get another Senior Tour matchup in Rodgers vs. Brady.

You think Stefon Diggs is excited to go to the AFC championship game? 🤔 @stefondiggs #BillsMafia pic.twitter.com/yDBtPGyr3r

With all that said, HELL YES #BillsMafia. Keep that train movin’ along and please get a Tables, Ladders & Chairs match going outside of Arrowhead.

Lil Wayne in a white fur coat and smiling ear to ear at Lambeau Field will always kill me. What an improbable relationship. On top of that, a socially-distanced Lil Tunechi celebrating Green Bay’s win by mumbling to himself in a suite will not be lost on me any time soon.

But anyway, without further ado, whether it was fire, fierce, funny or fail, it’s clown car time. So let’s jump right into the fray with the passion of whoever this guy is.

Possibly the hardest playoff postgame fit of all time by Chad Henne pic.twitter.com/BNc8qcCEaN

Are you kidding me? An unfathomable 3rd and 14 gallop to keep the drive alive and then that wizard-like 4th and inches PASS to clinch the victory? Listen, Chad Henne can wear that Old Navy bucket bin special all he wants. He earned it and just look at the guy up there owning the moment.

Speaking of, let’s talk about the real legend looking every bit the part. Gonna venture to guess there’s roughly a 197% chance Patrick Mahomes plays next Sunday. This isn’t even a conversation. He’s arriving at Arrowhead Stadium in a BatMobile with his face on the hood. 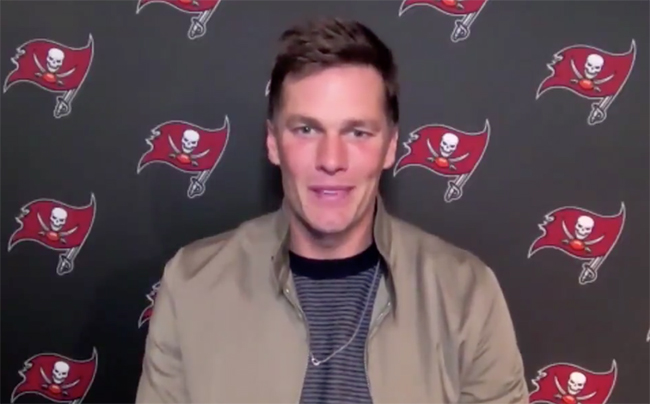 Tom Brady celebrated the big win over the Saints by wearing a promise necklace he received in 8th grade. But really, just the idea of Tom Brady wearing a chain should have all of Green Bay terrified. Can already see it happening.

Since Aaron Rodgers’ “arrival attire” has served as his other weekly uniform for 19 straight weeks, with the only difference being it’s either a knitted Packers cap or an Adidas one, I threw a dart at Green Bay’s IG page and landed on this photo. His boring bland approach does seem to be working though, so he sure as hell shouldn’t stop this special streak against Tom Brady.

The most important element of this getup that you might not have noticed yet is that excellent “Chicago Rodman” head t-shirt. An nWo version would’ve killed, but we can’t have it all.

Brees on the season coming to an end pic.twitter.com/mNkxUlcU8O

I’ve spent the entire team mocking “Accountant Drew Brees” and “Team Building Activity Guy Drew Brees” and on and on it went. Today is not that day. Absolutely gutted to see him go out throwing 3 INTs that clearly decided the game.

Still feels like Mecole Hardman, who slays it every week, simply does not get his fair due. Wearing the college jersey of Patrick Mahomes was outstanding and also a brilliant way to get a few more throws in your direction. 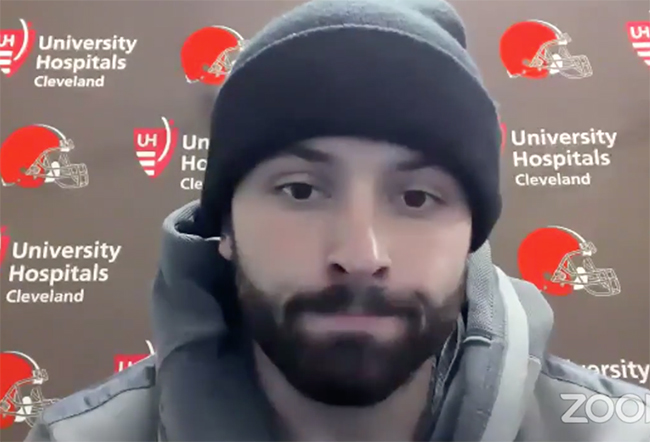 Baker Mayfield putting on his very best “well that sucked” face. Credit to him though for keeping that Beard Trimming Game precise and immaculate.

Wow, what a dramatic turn for the ever-changing, free-flowin’ Dazed & Confused character. UPDATE: Well that’s because this is actually Jack Eichel, captain of the Buffalo Sabres. Same city, though, so it allows for 50% credit. Now theeeere’s our guy!

Cole Beasley has had many looks over the years and each time he looks like an entirely different person. This latest installment would be no different. Please give this man a cameo in Game Of Thrones. (via @JoeBuscaglia) pic.twitter.com/LWzj267roh

Cam Jordan, consistently with the vibrant fits that always match his personality. Feel like those crazy AJ1s were designed with people like Cam specifically in mind. 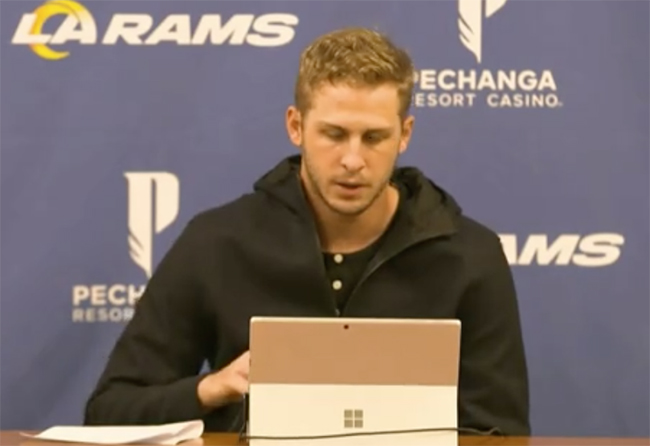 Jared Goff conducting a press conference while typing on a Microsoft Surface is the most Rams thing ever. Talk about sizzle! No question he was messaging with Sean McVay, who was telling him exactly what to say.

Cam Newton out there just hangin’ on the beach and vibin’ in Cali with Bugs Bunny, man. Now that’s a look. NOTE: Someone please ensure this man is on a roster next year.

"It's just the little details… In the playoffs every drive means something. It's about putting up points." @Primetime_jet pic.twitter.com/dqzvgs64Gn

Hollywood Brown is the AFC’s version of Teddy Bridgewater in that he looks he’ll be riding a tricycle as soon as he’s done with his call. 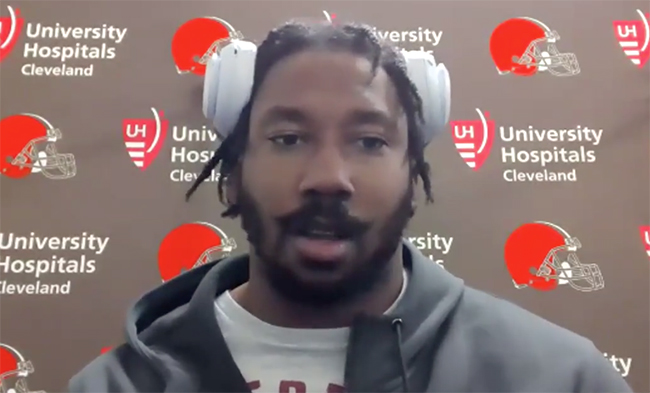 The timeless Princess Leia look works like a charm every time. But who am I kidding, Myles Garrett wasn’t nearly at 100% and the dude was running past his own DBs to chase down WRs. Insanely different level.

We've got Pancho Power on our side tonight. ❤️💙#GoBills | #BillsMafia pic.twitter.com/nbVtHnmgqq

Defensive tackle Harrison Phillips must be making one hell of an impression with #BillsMafia to have the honor of wearing the unbelievably great Pancho Power jacket. Or probably everyone gets one? Whatever. He actually wore his this week and that’s what counts.

Is Browns up and coming coach, Kevin Stefanski, the new Sean McVay? This GQ-like shoot he chose to do with the team tells us, emphatically, YES.

The old sherpa up top/ripped denim on the bottom routine. Looks like a jacket one could get from Forever 21, but OK. Sure. However, the knitted hat does match to complete the circle. Damn you, Kelce.

That chain. Or shall I say, those chains. Holy sheesh!

A guy who dresses to the nines wearing elite brands every single week wears… this. For a huge playoff game. You just can’t predict baseball, Suzyn.

Justin Tucker, the best kicker in the game by a mile, throwing up the “3” while boarding a flight to Buffalo not knowing he’s about to kick and miss two field goals that he usually hits in his sleep.

Bradley Bozeman is a great lineman and such a steady force for that unit, but he’s really just here because linemen are the best. Always such a bare-bones approach. He could be in a college dorm room blaring Slayer for all well know.

Not gonna pretend to know a lot about Packers linebacker Rashan Gary, it’s just that these Starter jackets are always so clean. Off the top of my head, the only team that could possibly have a bad one would be the Jaguars. And that makes perfect sense.

Can we get a roaring “BOR-RING! BOR-RING!” chant going for Packers defensive back Jaire Alexander? Come on, man! It’s the playoffs. 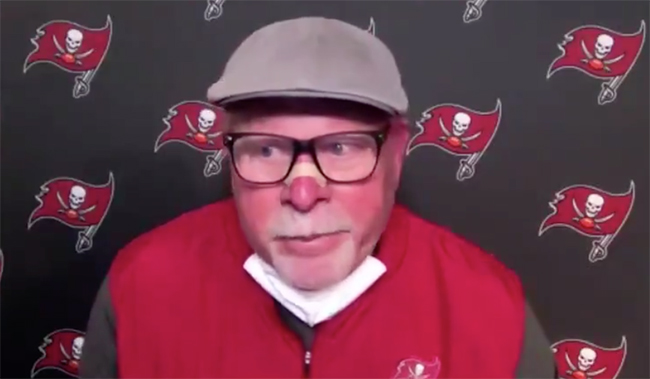 I’ve ended a lot of these with a photo of Bill Belichick looking miserable or insane or both, but that’s just not possible now. So we’re going with the lovable Bruce Arians. What a character. Gotta be happy for the guy.