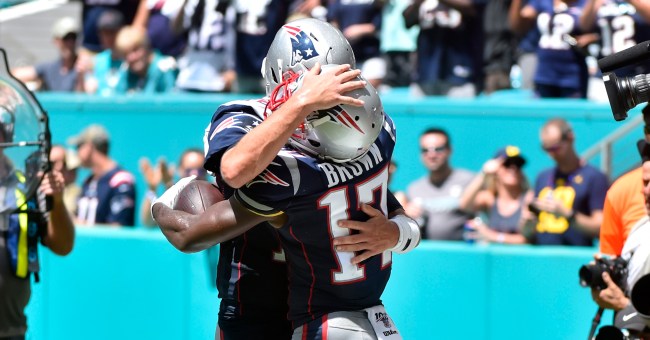 After what felt like a year, Week 2 of the NFL season eventually dropped into our laps for a glorious Sunday of what should equate to roughly 12 hours of valuable couch time for the true football fan. Yes, we finally made it. But for a league where every season seems to fly by the very moment it kicks off, Antonio Brown did one hell of a job — AGAIN — in making this past week seem like an eternity.

Expect more of the same today and this entire week. But man, for a guy being accused of sexual assault in a civil lawsuit, it sure doesn’t appear to be fazing him.

Yup, it’s all Gucci for AB.

In other NFL-related ‘buzz’, this time of the fashion ilk, I would like to make it crystal clear that Gardner Minshew’s hilarious “Boogie Nights meets Uncle Rico” getup that’s been moving at the speed of light on Twitter is nearly a year old.

The Texans are 7 1/2 point favorites over the Jaguars but I saw Gardner Minshew get off the team plane and I’ve got Jacksonville by 35. pic.twitter.com/OqRHUK3gBW

Oh, it’s true, it’s true. This is not the Jags’ new starting QB landing in Houston. It’s what the mustachio’d legend wore to the Alamo Bowl last December.

But anyway, onward and upward. So in tribute to overly enthusiastic CNN anchor Chris Cuomo — whaddya say, let’s get after it! Because Week 2 was a special kind of vibrant. 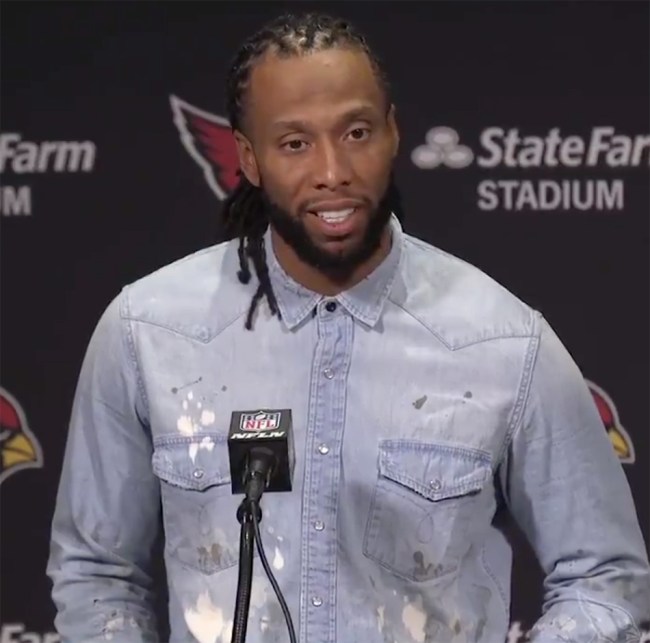 First and foremost, when you’re wrong, you’re wrong. And last week I was dead wrong not to include Larry Fitzgerald, who shockingly elected not to wear a suit for what seems like the first time in his career.

So that’s why he’s landed in this installment because it’s never too late to celebrate a faded western button-down, complete with a healthy dose of paint splats and fake grease stains — especially for a guy like Larry Fitzgerald.

His only mistake was buttoning it to the very top. That’s a clear and obvious no-go for a shirt like the one we have here.

The Texans roster as a whole seems to have a hell of a lot of fun each Sunday with an array of “outside the box” fashion statements — as you’ll soon see as you scroll down further — but it’s the group efforts that always seem to be a cut above.

The linebacking trio of Zach Cunningham, Dylan Cole and Benardrick McKinney deciding their first home game of the season was already time for a Space Jam Tune Squad theme just raised the bar by a mile come Halloween time.

It’s long been confirmed that DeAndre Hopkins can do just about anything on the football field and wear whatever the hell he wants off of it and easily pull off the look regardless of how stupid it might look on someone else. “GLOry” indeed, D-Hop.

Since we’re here, it’s worth noting that both of these special traits are precisely what Cam Newton has been badly trying to do, but has yet to do.

NYC area reporter: "you had a chance to end up in New York…"

Josh Allen: "I *am* in New York." pic.twitter.com/KqEtNkgyyY

Josh Allen delivered an exceptional version of Vinnie Chase’s bold “I am Queens Boulevard” moment after beating the Jets and Giants in consecutive weeks at MetLife Stadium.

BAH GAWD! This is absolutely the first time we’ve seen an ounce of charisma from the Bills QB and I couldn’t be happier for the guy. If this is the case going forward, I’m definitely gonna miss Allen’s extremely vacant “caught stealing” face that we’ve all become so accustomed to.

Who wore it best? pic.twitter.com/znlTJ2pHiY

Now, for the best part. Cam saying “it’s for me to look myself in the mirror” at the 3:38 mark of his press conference:

Cam Newton is at the podium https://t.co/dF2smMAOKq

This dude is the funniest guy in the NFL when he has no idea how funny he’s being. I honestly can’t believe we get four months, at minimum, of this circus act.

Don’t care who does it and don’t care how often it’s done, the “Very Top Botton” look sucks and will suck forever.

This shit is getting pretty awkward, Tom.

Rumored NFL QB Kirk Cousins, quite clearly channeling the “disappointed guidance counselor” role feels like it was (and is) destiny. Just an astounding display of mediocrity.

Aaron Rodgers used the term "bonehead" to describe him thinking the Packers had a first down right after the 2-minute warning in the first half based on the initial spot. Didn't realize it was fourth-and-1. https://t.co/y76eBV23hc pic.twitter.com/SuwODU5J9Z

The purposeful kick-out to convey “yes, oh yes, these are my $750 shoes” was a forced-enough move we won’t soon forget, while keeping in mind that Aaron Rodgers is desperately trying to hang on in Green Bay, in countless ways. 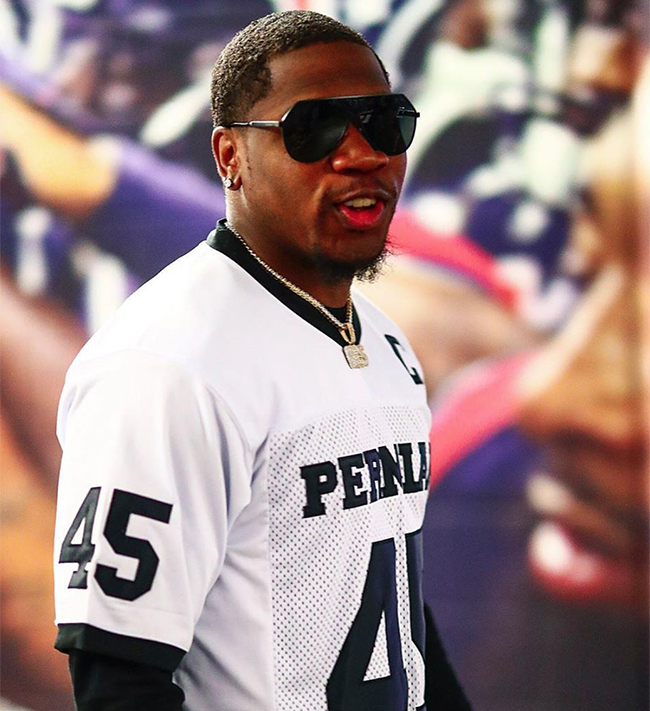 Well, I guess it was Friday Night Lights day, with an appropriate splash of Any Given Sunday, because ‘Skins linebacker Josh Harvey-Clemons and safety Montae Nicholson teamed up for the explosive Boobie Miles-Willie Beamen combo.

Despite the loss and an empty stat sheet for Harvey-Clemons, Nicholson did enough damage for both with seven tackles and an interception.

Additionally, they’re both wearing AJ1s, which instantly vaults them to top of the “Likable Redskins” list. Not exactly an impressive feat, but it’s… something. 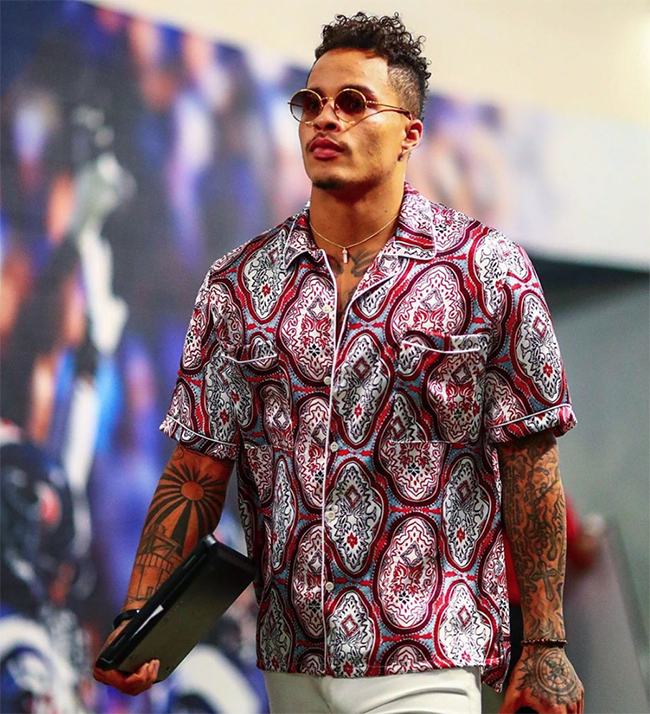 Kenny Stills has no idea what team he plays for and neither do I, but WHAT A SHIRT.

When you have to cover #14… pic.twitter.com/EHAReTqHgB

The confidence here is off the charts. I don’t care if Stefon Diggs finished with 1 catch for 8 yards — spoiler alert: he didn’t— the FU confidence is everything you want in a teammate.

This is the look of a guy I'm willing to put all of my faith in. #HereWeGo pic.twitter.com/R66LTPNAzt

Jesus. This is happening? Well, whatever, Rocky Balboa Jr. is here, he’s in the buildin’, and he’s ready to fight. 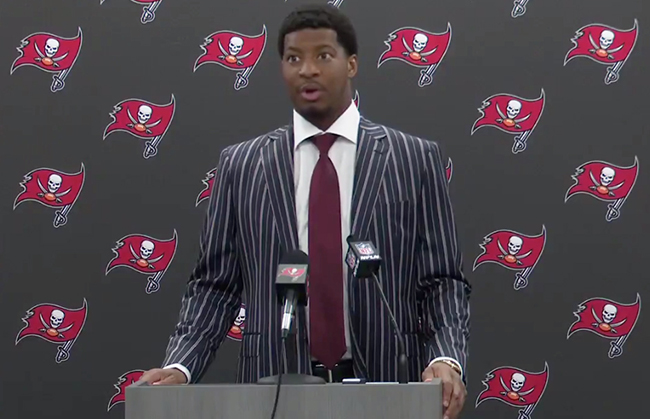 The stripes are a little dizzying to observe for more than a few seconds and give off the feel of a grape licorice-lace variety pack. Maybe ditch the tie next time? Or perhaps go full throttle and throw on a top hat that matches the jacket. #HereToHelp

My immediate reaction upon seeing this photo of Jags kicker Josh Lambo was “this guy looks like a complete nutcase, the fun kind of nutcase.”

Then I went to his Instagram page and read his bio, which reads as follows:

Just phenomenal. Though I’m ashamed to say I was not previously aware of this dude’s magnetic presence and descriptive qualities. However, do trust that Lambo will prominently be in the mix going forward assuming this spirited approach continues.

Per multiple insiders, invites to the event were delivered personally by a dancing clown draped in a Bomb Pop-themed romper. Not exactly surprising news, but an entertaining visual nonetheless.

When the big fellas make a concerted point to be noticed and celebrated, it’s best to oblige.

Finally, as best as it can be said, the “who the hell does this guy think he is” might be the most self-aware moment in NFL history.

Been here twice before , so I know how the 🎲 roll. #Everything1K #Ju1KceWayyy