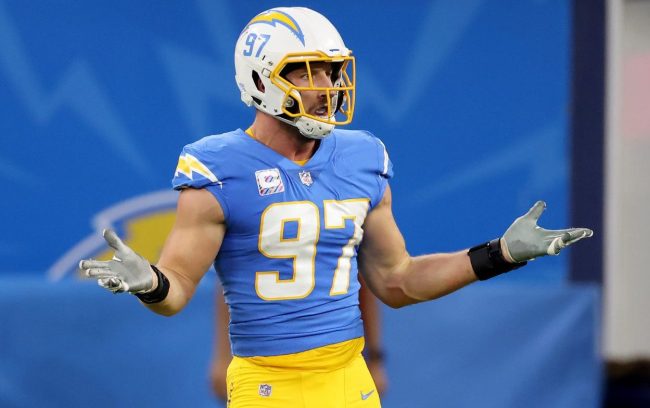 For the first time in NFL history, Week 18 is on the horizon. As the extra week looms over the league, quite a few different playoff scenarios could still unfold.

One of the many wild ways that may potentially play out could result in two teams taking knees for 60 minutes to force a tie.

The crazy, chaotic scenario begins at 1:00pm ET on Sunday when the Jaguars play the Colts. Presumably, Indianapolis will beat Jacksonville.

However, the Jaguars are hosting the Colts. In their last six meetings at TIAA Bank Field, the home team beat the visitors all six times.

Get a load of the Jacksonville Jaguars home record since 2015:

And, if there is anyone who can blow a game against the Jags, it’s Carson Wentz.

Should Indianapolis break the streak, the Colts go to the playoffs. That makes Sunday Night Football between the Raiders and Chargers a winner-take-all to reach the playoffs. Winner is in, loser is out.

If the Colts manage to lose to the Jaguars, insanity could unfold.

If the Jaguars win at 1:00pm, it would be in the best interest of the Raiders and Chargers to take a knee on every single play to ensure a tie. As a result, they would both be guaranteed a spot in the playoffs.

Would it be unlikely that both teams would kneel the ball on every play? Sure. Could both organizations agree to run the ball up the middle for 60 minutes straight so that the game ends in a draw? Also sure.

It would be an absolute nightmare for the NFL, but it is not against the rules. The Jaguars just have to beat the Colts first.