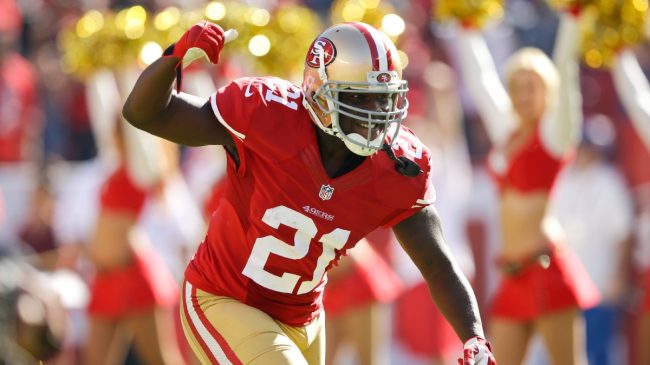 Frank Gore is one of the most accomplished rushers in the history of the NFL.

The University of Miami product ranks third all-time with 16,000 rushing yards. He also holds top 20 marks in rushing scores, yards from scrimmage, and career touches. He’s a five-time Pro Bowler and an eventual Hall of Famer.

Gore played 16 seasons in the league with five different teams. The majority come as a member of the San Francisco 49ers. Earlier this week, the running back announced that he’d be retiring from the NFL, signaling an end to the storied run.

And he’s choosing to go out in the place that it all began.

Gore plans to sign a one-day deal with San Francisco in order to hang up the cleats as a 49er. He’ll end his career with the team he spent a decade playing for between 2005 and 20015.

The 49ers drafted Gore with a third-round selection in that ’05 draft. He far outplayed that standing, recording eight different 1,000-yard campaigns in San Francisco. Now, he returns after spending time with the Bills, Colts, Dolphins, and Jets.

As expected, social media was quick to react to the news of Gore’s retirement. Check it out below.

Who would have thought that the running back who would go on to become the NFL’s third all-time leading rusher from a 2001 Miami backfield that included Clinton Portis, Willis McGahee and Najee Davenport would turn out to be none other than Frank Gore. pic.twitter.com/B5VE0CZl3Q

Frank Gore tells @TheSFNiners_ podcast that he will be signing a one-day contract with the 49ers and will retire from the NFL.

He finishes his career with the 3rd most rushing yards in NFL history (16,000).

Frank Gore plans to sign a one-day contract to retire as a 49er and will look to join the team's front office pic.twitter.com/tfHc4i5GUp

• Third most rushing yards of all-time

What a career for Frank Gore 👏

Frank Gore said he plans to sign a one-day contract with the San Francisco 49ers and retire as a member of the team that drafted him.

Gore has played in more games than any other player in NFL history (241).

Frank Gore tells @TheSFNiners_ podcast that he plans to sign a one-day contract with the 49ers and retire from the NFL.

Gore spent his first 10 seasons with the Niners, racking up 11,073 rushing yards and 75 total TDs. pic.twitter.com/REjpUKEX4j

Frank Gore said he plans on joining the #49ers front office in some capacity. https://t.co/0Q8QoywCdR

Frank Gore should absolutely be a Hall of Famer. https://t.co/nVXWtS4XVr

Gore will put a bow on his 16-year career, finishing with the organization where he blossomed into one of the game’s top players. An eventual call from Canton shouldn’t be far behind.