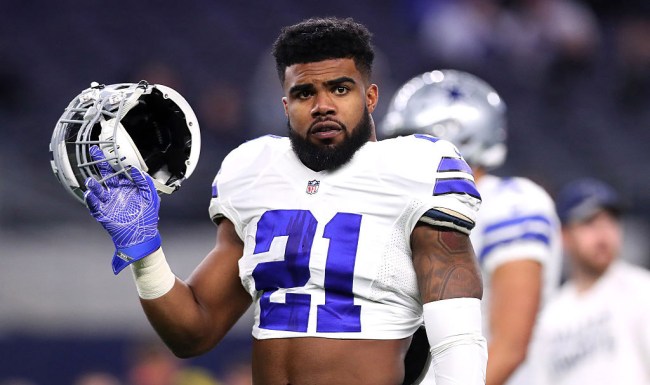 The woman who accused Dallas Cowboys running back Ezekiel Elliott of domestic violence in 2016 once discussed leaking sex tapes of herself and Elliott in a text message exchange with one of her friends according to the NFL.

Today, Yahoo’s Charles Robinson leaked a portion of the NFL’s 160-page report on the Ezekiel Elliott domestic-violence case which details an exchange between Elliott’s accuser, Tiffany Thompson, and one of her friends in which they discuss using sex tapes of Thompson and Elliott as a means for blackmailing Elliott for money.

“The League’s forensic experts also recovered evidence from Ms. Thompson’s phone that she had registered an email address titled, “ezekielelliott sex vids” during the month of August, 2016. In addition, a text message with her friend [name withheld by Yahoo] was recovered that showed them talking about their need to make more money and Ms. Thompson raised the idea of selling the sex tapes she had of herself and Mr. Elliott. Her friend [name withheld] said they should blackmail Mr. Elliott with them, they’d be “millionaires”. Ms. Thompson replied that she’d like to but was scared. When Ms. Thompson was asked about this by the League’s investigators, she stated that she did have sex tapes of her and Mr. Elliott on her phone and she did open the email account but she denied doing so to blackmail Mr. Elliott.”

Exhibits accompanying the NFL’s report also included the exact exchange between Thompson and her friend, which took place on Sept. 21, 2016.

[Thompson]: What if I sold mine and Ezekiel’s sex videos

[Friend]: We’d all be millionaires

[Friend]: We could black mail him w that

[Thompson]: I want to bro

[Friend]: Id be like look give me 10k or I’ll just sell our sex videos for the same amount flat

[Friend]: Me and my friends tryna go on vacation and get boob jobs

(the report notes a pair of blank texts)

Despite this text message exchange and another in which Thompson explicitly asked a friend to lie to the police, the NFL still chose to suspend Elliot for six games.