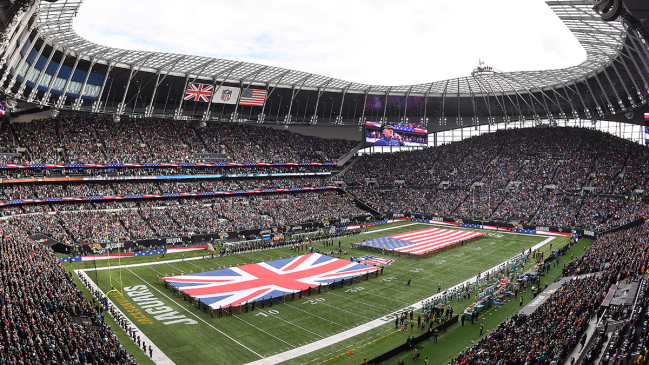 It’s been 15 years since the NFL kicked off its “International Series” by having the Dolphins and the Giants fly over to London to face off inside Wembley Stadium, which marked the start of a new tradition that’s seen the majority of teams either head back across the pond or make the trek to Mexico City for a game.

This year, the league is expanding its horizons by bringing the International Series to Munich, Germany on November 13th, which is when Allianz Arena will host a contest between the Seahawks and the Buccaneers that managed to drum up an insane amount of anticipation based on the crazy wait times people were forced to endure when tickets went on sale.

That contest will be prefaced by a trio of games back in London that will be hosted over the course of October at Tottenham Hotspur Stadium, which will likely see around 60,000 spectators pack the stands when the Vikings and the Saints face off on Sunday in a showdown slated to kick off at 9:30 A.M EST.

That venue is typically home to a slightly different type of football, and while all of the parties involved have presumably been able to firm up the logistics required to transform a soccer field into a football field by now, it’s still quite the undertaking—as evidence by a video the NFL recently shared showing just how much work goes into the overhaul.

On Tuesday, the NFL shared a behind-the-scenes look at a process that involves removing the retractable pitch Tottenham plays on before reconfiguring certain seats, erecting the goal posts, and painting the lines, numbers, and logos that tie the field together.

When the pitch becomes the gridiron in Tottenham. 🇬🇧 @SpursStadium @NFLUK

If that video tickled your fancy, then I’d highly suggest checking out this clip of the Red Wings turning a blank canvas at their arena into a slightly more recognizable NHL rink.