The NHL Wants To Incorporate Alligators Into The 2023 All-Star Game Skill Challenge, Here’s How They Should Do It 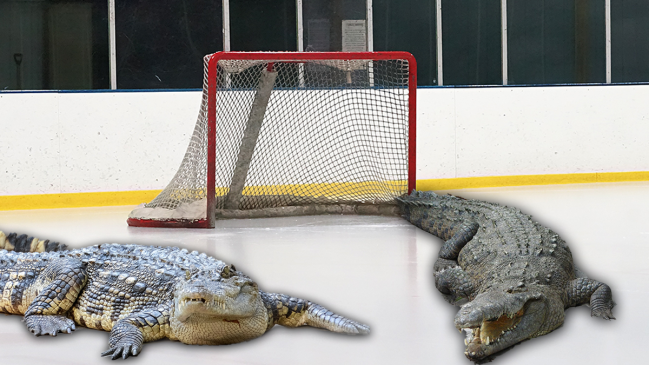 The NHL is rarely at the forefront when discussing leagues creatively seeking out new fans. Most sports fans can’t even pick out a picture of arguably the league’s biggest superstar, Connor McDavid.

But the league is getting better in those areas. The move back to ESPN in 2021-22 was a massive success. Viewership numbers for the 2022 Stanley Cup Finals between the Colorado Avalanche and the Tampa Bay Lightning nearly doubled the 2021 numbers.

The NHL also got creative with the 2022 NHL All-Star Game Skills Competition. The game was held in Las Vegas and the league used the famed fountains at the Bellagio Hotel for its precision passing challenge.

The 2023 game is set to be held in Sunrise, Florida which is the home of the Florida Panthers and just outside of Miami. Jeff Marek and Elliotte Friedman reported on their 32 Thoughts podcast that the league has a crazy idea for this year’s skills contest.

The NHL is looking at ways to include alligators in the 2023 All-Star Outdoor Event in Florida, via 32 Thoughts Podcast 🤯😳

If you were in charge of the All-Star game, how would you incorporate gators? 🐊

Gators and hockey. Hockey and gators. What’s better than that?

The podcast didn’t say how the league plans to do this, so we’ve come up with some ideas for them.

NHL Fastest Sgator: You’ve all seen the fastest skater competition where contestants race around the ice and the fastest time wins. Well, why not figure out who’s the fastest gator? Strap some skates onto some big green bois and let’s see who can make it around the quickest.

Alternatively, hang some raw meat from the back of the players’ skates and have the gator follow them around the ice. The last skater standing wins.

Precision Passing To Hungry Gators: In previous years, the precision passing contest has involved players shooting pucks into mini nets and over obstacles.

This year, have the players shoot chunks of food into the waiting mouths of any number of hungry gators.

Elite Gator 3-on-3: Last year the NHL took a huge step forward in promoting the women’s game with a 3-on-3 game between US and Canadian All-Stars.

Grab six of the most athletic gators you can find, throw a goalie behind ’em, and let ’em play. No penalties. No offsides. Just gator vibes.

There’s every chance that more fans watch that than the actual NHL All-Star game.