Nick Saban Comments On His Love For ‘Deez Nuts’ Jokes 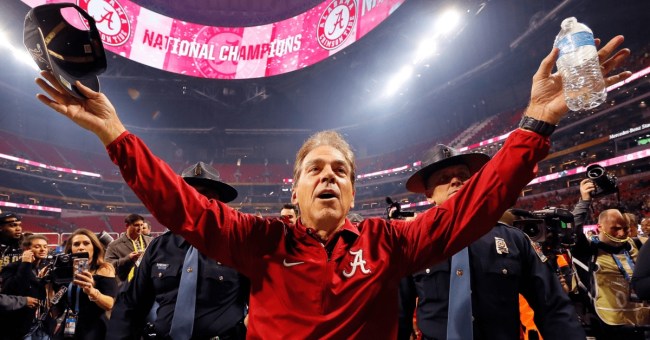 From the outside looking in, Nick Saban seems like an all-business, all the time type of guy. You don’t just turn Alabama into a national powerhouse and win five national titles since 2009 by chance or creating some sort of playful culture, but apparently Saban does have a soft spot for a certain type of joke.

Former Alabama running back Josh Jacobs shared a couple of years ago that Saban was a fan of dropping ‘deez nuts’ jokes during practice. Jacobs told the story of, explaining “like if I was catching a lot of passes that day, he would try to say something like ‘Hey Josh, you keep catching all these passes, how about you hold deez?’

While Saban’s love for ‘deez nuts’ jokes has been well-documented for quite some time now, Dan Patrick decided to bring it back up during his show on Wednesday and straight-up asked the legendary coach ‘would you like to comment on ‘deez nuts?’

One of the questions DP posed to Nick Saban this morning was "Would you like to comment on 'deez nuts'?" He answered as followed 😂😂

“I like to have fun with the players, it’s probably good that they see you every now and then in a little bit of a different light. Since I’m a defensive coach and see the defensive players a little bit more, it’s a little easier to be light-hearted with the offensive players,” Saban explained. “There are some players on your team that you just love, like Josh Jacobs, Tua, Henry Ruggs. We’ve had a lot of really good players on offense that have great personalities, great work ethic and you just love ’em. Those are the guys you usually pick out to do all the teasing stuff.”

There you have it, that’s the story behind Saban dropping ‘deez nuts’ jokes all over the practice field. It’s not necessarily the greatest story ever told, but just the sheer thought of Saban out there saying jokes like that is pretty funny.