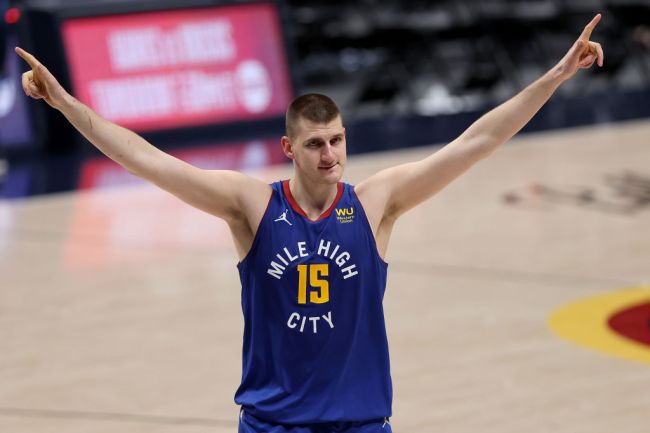 Nikola Jokić is the 2021 NBA Most Valuable Player, but his teammates aren’t a big fan of his work as a DJ. The 6-foot-11, 284-pound 26-year-old was born in Sombor, Serbia and grew up in a two-bedroom apartment with his two brothers, both parents and his grandmother. As a native of the Southeast European country, Jokić is big fan of traditional Serbian music, which we found out from Austin Rivers.

Rivers, a teammate of the MVP in 2021, posted a video from earlier in the season. He pans the camera around the weight room and points out that Jokić is on the aux cord. His music choice is certainly different, and loud accordion blares throughout the room, traditional to Serbia. As some of the other Nuggets try to get a lift in, Rivers says that he learned that he cannot workout at the same time as “big fella.”

Nikola Jokic workout music it 🔥 , as per Austin Rivers pic.twitter.com/hgYmeXdfH7

Jokić’s music choice is hilarious and Rivers’ reaction is even funnier. The loud, rippin’ accordion track doesn’t quite set the mood for a hard, heart-pumping workout and there’s a reason for that. This kind of music is typically played more often at celebrations in the Balkans— like weddings, graduations, etc. It is unlikely that a gym in the European region (Bosnia, Serbia, Croatia, etc.) would play this music.

With that being true, there is a chance that Jokić was trolling his teammates. Either that, or the NBA’s Most Valuable Player is a lunatic, in the best way. Whether it is native to your country or not, getting in a lift with that song blaring would be tough. It takes a different type of person to lock in with accordion in your ears.