Vancouver Canucks Prospect Pulled Off ‘The Michigan’, One Of The Coolest Hockey Goals I’ve Ever Seen 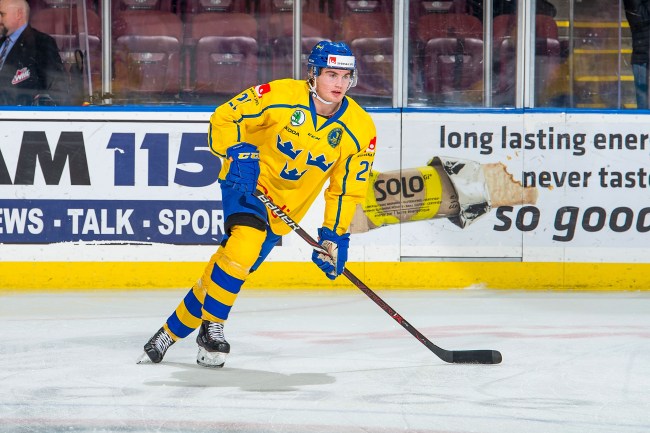 Vancouver Canucks prospect Nils Höglander was playing in a Swedish Hockey League game and pulled off a goal known as ‘The Michigan.’ Diehard hockey fans might know the origins of this goal but for the rest of you out there I’ll give you the brief explainer.

‘The Michigan’ was made famous by Mike Legg, a Canadian hockey player who was drafted by the New Jersey Devils back in 1993 but spent his career in the minor leagues. Mike Legg played his college hockey for the University of Michigan and he earned the ‘Goal of the Year’ in the 1996 NCAA Tournament against the University of Minnesota Gophers.

The goal looks more like something you’d expect to see in a street roller hockey game than anything you’d imagine on ice. It’s nearly impossible at full-speed but Finland’s Mikael Granlund managed to pull off ‘The Michigan’ at the 2011 IIHF World Championship semifinals to beat Russia and help Finland move on to win gold.

In order to execute ‘The Michigan’, one must pick up the puck on your stick and wrap it around into the top corner of the net. Here’s Vancouver Canucks prospect Nils Höglander dropping this filthy goal in the Swedish Hockey Game earlier this week.

Nils Hoglander with the goal of the year today for Rogle! 🥍+🏒=🚨 🤯 pic.twitter.com/IdU8KJGRTG

From another angle. The bank off of the back of the net is sweet enough. To pull off The Michigan while under pressure is insane. pic.twitter.com/Qt5fZhzxFT

The degree of difficulty here is through the roof. Incredible awareness to avoid the stick check WHILST cradling the puck for the lift and tuck.

The celly is top-notch as well.

This is legit one of the nastiest goals in hockey history… not only does he do the Michigan finish, but the bank off the net to elude a defender + Toey into the Michigan 🤢 https://t.co/kGU3rrP66T

Honestly, nothing about that is hyperbole. The Michigan is truly one of the nastiest, filthiest, most insane goals that any hockey player can pull off and this prospect just did it against some highly skilled competition. The Canucks have to love what they’re seeing there.

If you want to see Mike Legg’s original goal dubbed ‘The Michigan’ from back in the 1996 NCAA tournament I’ve got you covered. God bless YouTube for carrying decades-old hockey highlights:

It has been a BIG WEEK FOR BADASS HOCKEY GOALS. My colleague Connor, a BrUiNs FaN, just threw up this insane clip. It’s the first-ever lacrosse goal scored in the NHL and it’s an absolute beauty.

As far as the NHL goes (for me), Boston’s in first in the Eastern/Atlantic and tied with Buffalo in points. My Tampa Bay Lightning lost to the fucking Rangers last night and sit 4th in the Wild Card.

Am I worried? Hell, no. I want this team to lose for a couple of weeks. They need to take some shots, get beaten up for a while, and get angry. They need to find that fire that led to tie the single best season record in hockey history (last year) but above all they need to get past the first fucking round of the playoffs.