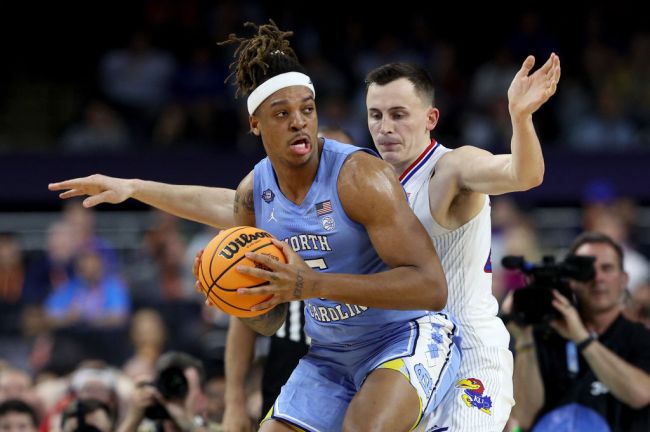 As North Carolina has made their improbable run to the NCAA Tournament Final, there have been plenty of players that have stepped up big time. Brady Manek, Caleb Love, and RJ Davis have all had offensive explosions. Leaky Black has been a force on the defensive end of the floor. However, it’s the 5th member of the starting lineup has arguably had the biggest impact.

Armando Bacot has been an absolute force inside for North Carolina. He has given them a reliable scoring option on the offensive end and has dominated the glass on both ends of the floor. Now, he has made NCAA Tournament history and he only needed one half of the title game between UNC and Kansas to do it.

Tonight, he put up a double-double in the first half of the game for UNC with 12 points and 10 rebounds. That double-double made him the first player in history to record one in all 6 NCAA Tournament games. It also tied him with David Robinson for the most ever in a season.

Armando Bacot has recorded his 31st double-double of the season.

That ties David Robinson in 1985-86 for the most in a season in Division I history.

Bacot is the first player in NCAA Tournament history to record a double-double in all 6 games of an single tournament. pic.twitter.com/iDBcGU3iin

North Carolina took a 15 point lead into the half and Bacot was a big reason why. The Tar Heels outscored Kansas 18-2 in the paint and dominated the glass on both ends of the floor.

If Bacot and UNC can keep this up, they’ll be heading back to Chapel Hill with the school’s 7th NCAA title.