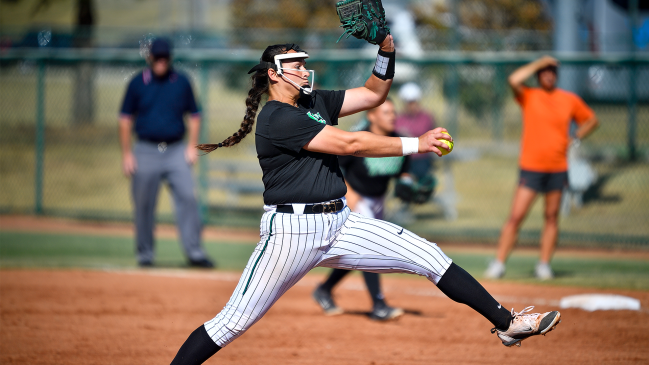 Hope Trautwein threw the most perfect game in the history of Division-1 softball on Sunday afternoon. North Texas’ senior starter is the school’s career leader in ERA, saves and lowest opponent batting average, and brought the school its first perfect game with a lights out performance against Arkansas Pine-Bluff.

NCAA softball games are seven innings long, but the run rule can invoked if one team is ahead by at least eight runs after five innings of play. That was not the case for the Mean Green and Trautwein pitched all seven innings without seeing a batter reach base. It was the nature in which she did it, however, that was impressive.

Trautwein saw 21 batters and sat them all down with 21 strikeouts. Every single Golden Lions hitter that stepped up to the dish was retired without putting a ball into play. It is believed to be the first perfect seven-inning game in NCAA Division I history in which every out was on strikes and the impressive feat cannot be understated. 21 up, 21 strikeouts.

The final out of the programs first ever PERFECT GAME ‼️@hopetraut goes the distance!

North Texas had its three-game series with Arkansas Pine-Bluff delayed due to weather, so Trautwein’s dominance was no fluke. As the team’s ace, she has thrown two career no-hitters and struck out 21 batters a total of three times.

With her filth on the rubber, Trautwein became the third pitcher in Division I history to record a seven-inning, 21-strikeout game. Alabama’ Alexis Osorio did it against Fordham in 2018 and Cal Berkeley’s Michele Granger did the same with a no-hitter in 1991 against Creighton. Neither was perfect.

Because North Texas’ game wasn’t televised and only 75 people were in attendance, it was a small crowd who saw history unfold live, but Trautwein will forever live in the books. Even she didn’t understand the moment as it happened.

“I really didn’t realize it,” Trautwein said. “I was like, ‘OK, another win down, on to the next one.’ But until (the SID) walked over with the game ball and it had it written on there, and he was like ‘I don’t think anyone’s done that ever. I was like, ‘Oh my gosh. I think you’re right.’”

Trautwein averages one strikeout per inning and has 581 total in her career. She is chasing the program leader Ashley Kirk, who reached 712 from 2011-14. The Mean Green have about 20 games left on the regular season schedule, so she will have to keep with her ridiculous pace. Assuming that she steps into the circle once every three games (it could be more, it could be less), she will have to put up almost 20 strikeouts in every remaining start and remain in the game for all seven innings. It’s not impossible, but it’s a tall task.

As for professional and collegiate baseball, I was not able to find an instance of a 27-strikeout (baseball plays 9 innings, not 7) perfect game. In fact, only once on either level has a pitcher even reached 27 strikeouts, and it came back in 1952 in the minor leagues. 19 years later, Buddy Schultz set the NCAA baseball record with 26 strikeouts in one game.

The only other instance that I could find of a complete-game, strikeout-only perfect game was in a five-run mercy rule victory in 2006 for future MLB Hall of Famer Clayton Kershaw. He saw 15 batters that day and put them all away on strikes. Oh, and he helped himself out with a grand slam.

It’s safe to say that Trautwein is in elite company. Her simply remarkable performance on Sunday came against a very bad Arkansas Pine-Bluff team, but even still, she never let them have a chance to smell a base. Perfection in its truest form.