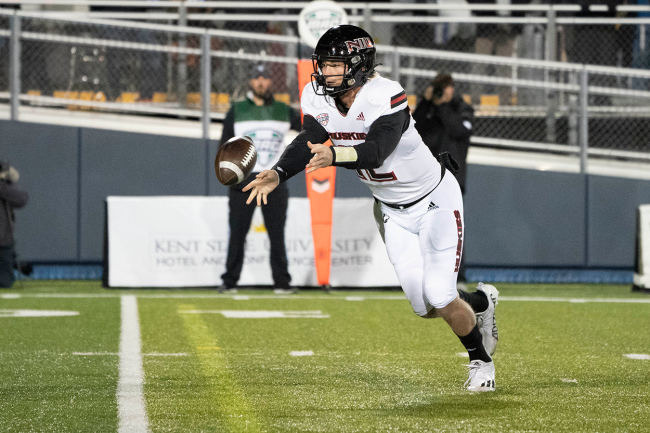 Northern Illinois quarterback Rocky Lombardi is also a fantastic punter. The 6-foot-3, 219-pound redshirt junior transferred from Michigan State in the offseason and has led the Huskies to bowl eligibility in his first year with the program.

NIU hosted Ball State on Wednesday night and it quickly became a MACtion classic. At the forefront of the 30-29 win was Lombardi’s arm. He was absolutely slinging the pill.

Rocky Lombardi threw a missile down the field 🎯 pic.twitter.com/0fU1j4hCkn

However, his takeaway highlight came with his feet.

Lombardi, who was the punter for his high school football team, often serves in a similar role on the collegiate level. He did so with the Spartans and he does so now.

In fact, he served as Michigan State’s starting punter in 2018.

When his team is facing a 4th down situation near midfield, Lombardi often stays on the field. If he gets the right matchups, the offense might choose to go for it. If not, Lombardi is allowed to punt.

Well, against the Cardinals, he put on a clinic. Lombardi punted twice throughout the game and both of the kicks were absolutely beautiful.

His first punt came in the first quarter from his own 49-yard-line. It died inside the Ball State 5-yard-line and was covered around the 2-yard-line.

Later, in the fourth quarter, the Huskies faced 4th-and-6 from the Cardinals’ 45. Lombardi set up at the 50 and placed a perfect pooch inside the 8-yard-line.

The Clive, Iowa-native’s second punt was crucial. Down by six, he stuck Ball State back up near its own goal line. Northern Illinois ended up forcing a punt and went down the field to score on the proceeding possession to take a one-point lead.

Have a night, Rocky Lombardi!