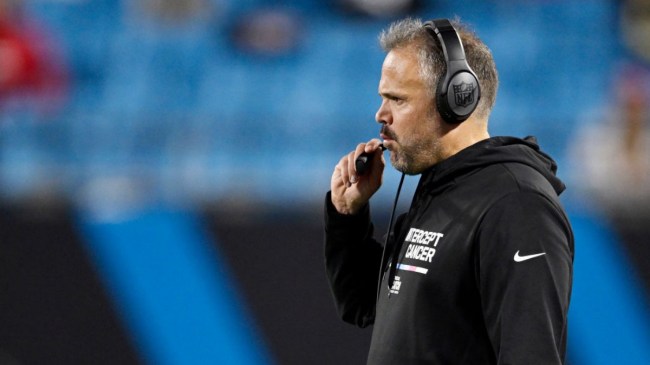 With just one week left in the college football season, there are many teams already making plans for the future as they prepare for their year to come to an end. Among those teams who know their seasons are over after this weekend, there aren’t many names bigger than Nebraska.

The Cornhuskers were a massive disappointment this season. They came into the season with the expectation they’d at least be competitive in the Big 10 in Scott Frost’s 5th year in charge. Instead he was fired after 3 games and the team has gone on to earn a 3-8 record.

That has left them with one of the nation’s more interesting coaching searches as they try to figure out who the right person is to turn their program around.

They reportedly thought they found that man, but he wasn’t interested. According to CBS Sports’ Dennis Dodd, Nebraska wanted Matt Rhule, but he turned down the job over the weekend.

Did Matt Rhule turn down the Cornhuskers this weekend? That was the word from several sources. Rhule had been the No. 1 candidate to replace Scott Frost. If Rhule has indeed taken his name out of consideration, that isn’t necessarily a statement about the quality of the job. It’s still a heavy lift for whoever takes Nebraska, but for Rhule, it may be a further indicator that he intends to sit out 2023 to rest and retrench.

It’s unfortunate for Nebraska as Rhule seemed like a good fit for the job, but he could have his sights set on a program less in need of a rebuild after taking over struggling teams with Temple, Baylor, and the Carolina Panthers.

Meanwhile, the Cornhuskers will have to go back to the drawing board as they look for their new coach.