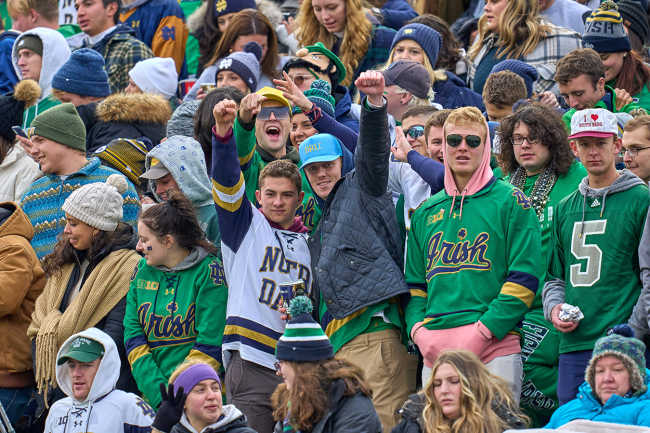 Notre Dame fans had a vested interest in Saturday’s Big 12 Championship game. Depending on which team won, the Fighting Irish may have a chance at the College Football Playoff.

As it stands, Georgia, Michigan, Alabama and Cincinnati are the top four teams in the nation. Oklahoma State is No. 5 and Notre Dame is No. 6.

Should Oklahoma State and one team from the top four lose during the conference championship weekend, the Irish could very easily get the fourth playoff spot. Thus, when the Cowboys came down to the wire against Baylor, South Bend was on edge— to say the least.

The Bears jumped out to a 21-6 lead at halftime, but Oklahoma State battled back and had a chance to win the game in the final moments. With just three minutes and 14 seconds left in the game, the Cowboys got the ball back and drove 88 yards to the Baylor two-yard-line.

Oklahoma State had 1st-and-goal with 1:10 remaining and no timeouts. After two runs for less than a yard and an incomplete pass, the game came down to one final play.

Running back Dezmond Jackson got the call and took the ball to the left pylon. He was tackled inches short of the goal line, effectively ending the game, giving Baylor the Big 12 title, and killing all playoff hopes.

A game of inches 👀@BUFootball comes out on top in the Big 12 Championship Game after coming up with a massive stop on 4th & Goal 🙌🐻 pic.twitter.com/mfHOr93hPw

The difference between making and missing the College Football Playoff pic.twitter.com/ZPffqHptm5

This is the scene at Brother’s, just a block off Notre Dame’s campus, as Baylor stopped Oklahoma State at the goal line.

The Irish’s College Football Playoff hopes are still alive by a matter of less than half of a yard. College football is the best.