Notre Dame VP Thinks College Athletics ‘Screwed Up’ With NIL, Calls It A ‘Mess’ – Is He Right? 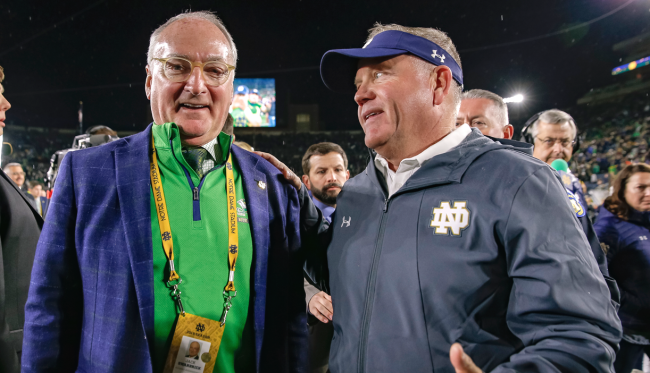 “We as college athletics have completely screwed this up,” Swarbrick said during a livestream on Wednesday with Notre Dame Director of Athletics James E. Rohr on the ND Loyal YouTube channel.

“The musician can play in a club on the weekend, the artists can sell art,” Swarbrick continued. “You couldn’t do any anything. Even those things you couldn’t do if you’re a student-athlete. And so, we supported it. What we never anticipated was that it would come online with no regulation. And it would come online coupled with the unlimited right to transfer. And it’s created an untenable situation, frankly, where most of what’s going on under the name of name, image and likeness has nothing to do with name, image and likeness.

“They are not commercial transactions where I am rewarding you for something great you’ve built or the fact you’ve got five million followers on your social media website. They are talent acquisition fees where I’m paying you to come to our school. And we have to find a way to get away from that.”

When asked in a followup question if he sees NIL moving in that direction, Swarbrick didn’t sound optimistic.

“It’s a little hard to see a way forward where congress isn’t involved,” he replied. “The NCAA is so gun shy about antitrust lawsuits right now, for good reason. They’ve lost all of them. And so, there’s a lot of discussion with congress, interest in congress. But we all understand the challenges of getting congressional action these days. So, it’s tough when probably your most promising solution is also one that’s so remote.

“So, I think we’re going to have a couple more years of this absolute mess.”

Are worries about NIL in college athletics being blown out of proportion?

While much of Swarbrick’s concerns about NIL in college athletics are legitimate, Front Office Sports reports that they may be a little overblown.

At the one year mark of the implementation of the new NIL rules, “athletes and industry experts told Front Office Sports that currently, collectives are much less powerful than the headlines would suggest. And instead of ‘ruining’ college sports, collectives could be an efficient and lucrative resource for athletes — and hardly a dark underbelly of college sports.”

One thing that Swarbrick, athletes and industry experts can all probably agree on is that NIL collectives are not going to just go away.

While money may appear to be flowing like water out of a tap right now to top college athletes, former Tennessee athletic director Mike Hamilton thinks that over time, the market will “self-correct.”

After all, at some point the people and companies shelling out all of this cash will start to asses their return on investment, especially when some of the players they sponsored fail to produce up to the donor’s expectations.