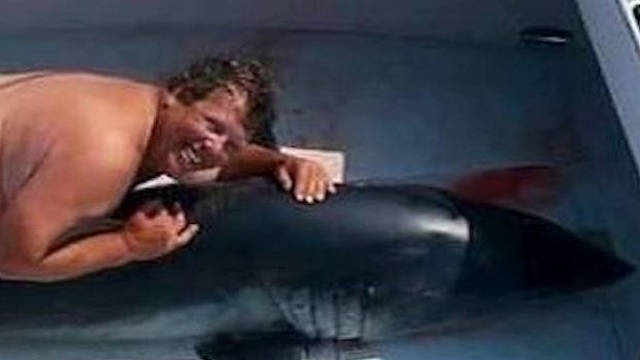 The naked man photographed hugging a shark has finally been IDed and unfortunately it’s not Gators coach Jim McElwain.

David Pingalore, the sports anchor for Orlando’s WKMG, appeared Friday morning on Orlando Sentinel writer Mike Bianchi’s radio show to reveal that someone watching his program emailed him several non-nude pictures of the man in the viral photo.

The man in the picture is apparently a former NYPD officer named Sean who took the photo off the coast of Long Island two to three years ago.

“This guy lives in upstate New York, that photo was taken two years ago off the shores of Long Island — not in Florida,” Pingalore said. “I have the man that’s fully clothed that’s naked on the shark, on the boat. Yes, normal photographs.”

According to Pingalore, the naked man wanted to meet Gators coach Jim McElwain, who many on the Internet believed to be the man in the photo, before getting freaked out by all the media attention.

“I was on the phone with Steve McClain [Florida’s senior associate athletics director for football],” Pingalore said. “The naked man wanted to meet Coach McElwain, then all of a sudden — an hour later — he flipped and got scared” and the meeting was called off.

“The man that is naked on the shark is afraid for his life because he believes bounty hunters — I’m not making this up — and people with shark people, whatever those people would be called … he’s afraid because the New York Post put up an article about ‘who is this naked man’ on the naked shark,” Pingalore said.