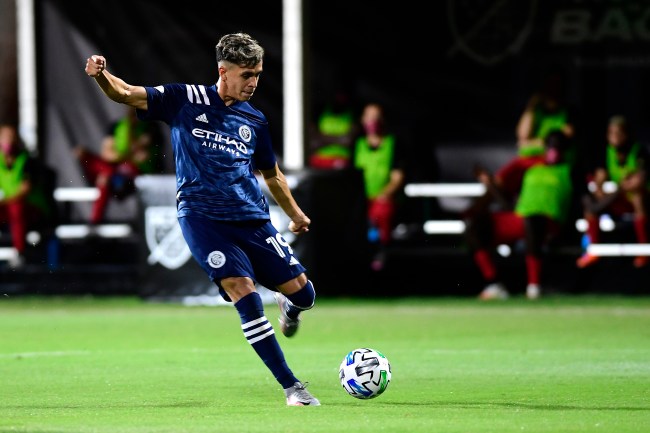 We’ve seen plenty of awful fans in the world of sports in recent year, but we saw a new kind of vile in the MLS today. At the MLS Cup final, a fan threw a full beer at an NYCFC player.

Medina got smacked by a full beer can thrown by a timbers fan.

Never ever ever be this guy. pic.twitter.com/BIH8RXydl8

The incident occurred after the MLS’s Golden Boot winner, Tate Castellanos scored the opening goal with a header from a free kick. While NYCFC was celebrating taking the lead over the Portland Timbers, an object struck Jesus Medina.

That object appeared to be a full can of beer. The fan was identified, ejected, and banned from Providence Park, the site of the match. We’ll have to wait and see where it goes from there, but I personally hope we never see this fan in another professional sporting event.

The fan who hit Jesús Medina with a can at #MLSCup has been identified, ejected and banned from Providence Park, according to @TimbersFChttps://t.co/N9qO1w1AKt

This awful moment will hang over what has otherwise been a very exciting match. With the MLS title on the line, the Timbers ended up scoring an equalizer with just a minute of stoppage time remaining.

For a league’s championship that ended up being decided in extra time to be marred by such a ridiculous act of violence is just disappointing.

Hopefully the match can finish without any other controversy as this match has all the potential to end up being memorable for the action on the field instead of the stupidity of the fans.