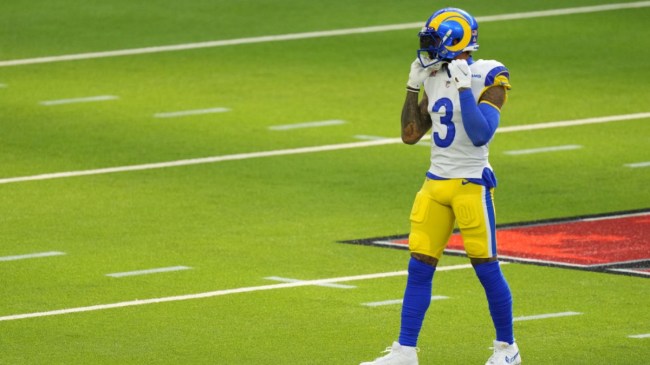 As the month of November approaches, football fans find themselves waiting to find out where Odell Beckham Jr will be playing when he is finally cleared.

There have been plenty of teams linked to a move for the star receiver. The Los Angeles Rams and Buffalo Bills were seen as the most likely teams to land him during the offseason. Since the start of the season, the New York Giants and Green Bay Packers have been added into the mix. Still, it is unclear exactly which way he is leaning.

Today, he seems to have indicated one of those teams won’t be competing for his signature. Odell revealed on Twitter that he was lowballed by the Los Angeles Rams when having contract talks with them.

LA knows where I wanted to be… but they didn’t offer me…. ANYthing! So idk what people want me to do, I def kno my worth and what the offer was isn’t reflective of that. So it’s tough to say that I can come on back even tho I thought I finally found that home !

But YES LA treated me normal and special all in the same breath , we see how that played out! For both sides. I went out to win a 🏆 there knowin the risk of playin without an ACL… and then I got the lowest of low offers after that goin into the next season. Impossible 😂😂

The Rams were able to sign Odell pretty cheaply last season and it appears they were trying to do the same this year.

There are enough competitive teams out there who need help at receiver that Odell shouldn’t need to settle whenever he does sign. It looks like the Rams will need to bring their offer way up if they want to land him.