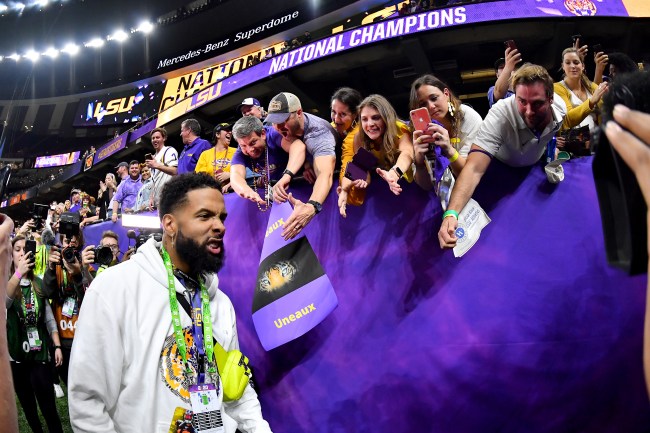 Odell Beckham Jr. wasn’t going to allow a police officer to be the fun police and ruin the party for LSU players celebrating their big win on Monday night.

After beating Clemson and winning the national championship, QB Joe Burrow and several LSU players sparked up victory cigars in the locker room.

This is the greatest video in the history of college football ♨️

One police officer walked into the locker room and began threatening to arrest LSU players for smoking cigars.

A police officer threw water on the party when telling the national champions they could not smoke the cigars that burned for easily 15 minutes after beating Clemson.

In fact, the officer announced to the players any smoking cigars in the locker room would be subject to arrest. Several players holding stogies laughed at the warning like it was a joke but the cop wasn’t smiling.

Another officer tried to tell them it was OK to celebrate with a smoke in the locker room but he insisted his commander told him it was a no-go.

A video of the confrontation between the police officer and the players made its way onto the Internet.

In the video, Browns wide receiver and LSU alum Odell Beckham Jr. could be seen slapping the cop in the backside and mocking him for trying to harass players smoking in the locker room.

Thankfully no one was arrested and everyone went home happy.