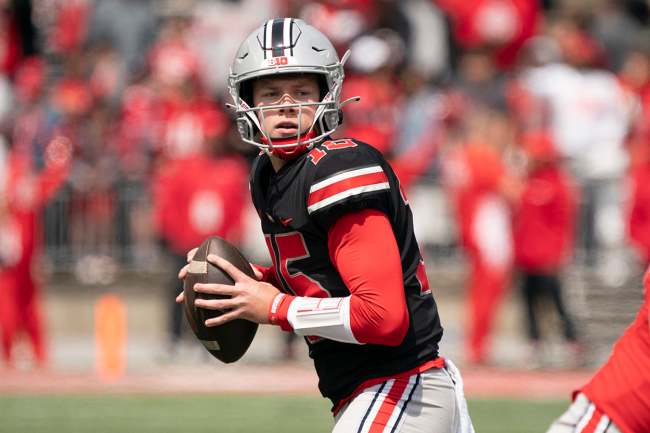 As a four-star commit in the Class of 2022, quarterback Devin Brown chose to graduate high school early and enroll at Ohio State during the spring semester. By doing so, he was able to participate in spring practice.

Although he is a part of a very busy quarterback room in Columbus, Brown stood out during the Buckeyes’ spring game and made the most of his reps.

However, now that the semester is over, Brown has lost his touch. Not as a football player, but as a landscaper.

After completing his first six months at Ohio State, Brown went back home to Utah and has picked up right where he left off with in terms of household chores. Although NIL might allow athletes to make money off of their person, Brown’s father is making him earn his keep for the summer.

To do so, Brown dusted off the lawnmower and headed out to his front yard. Whether it was the first mow of the year or not is unclear, but there isn’t much grass to be seen in Utah from early December to mid-spring.

Either way, Brown is not in peak lawn-mowing form and did an absolutely terrible job. He cut the grass. There is no denying that. He just didn’t do it well.

As a result, his father Andrew proceeded to put him on blast for his poor edging performance.

After a semester off, former 5⭐️ landscaper ⁦@dbrownqb33⁩ has dropped to a 3⭐️ in our rankings. Measurables and potential are still there but he needs to work on his edging. #backtoreality pic.twitter.com/nWmv9BiCU0

Maybe this is Brown’s secret plan? Maybe he thinks that if he does a bad job, he won’t have to keep doing it all summer?

True or not, it doesn’t look like his dad is going to let him off of the hook. Rightfully so!