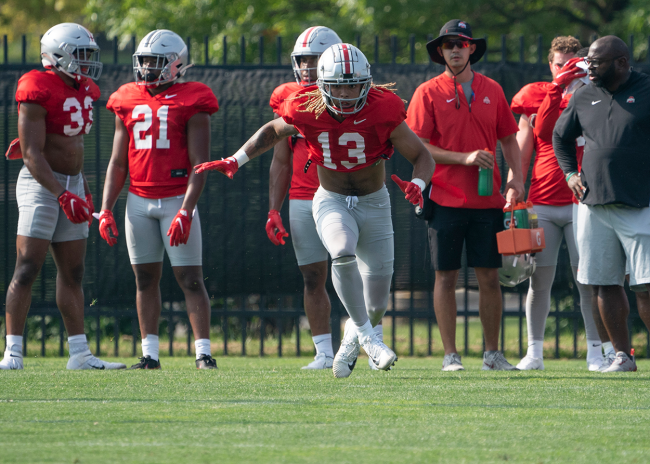 The junior from Seattle moved east to Columbus as part of the 2020 recruiting class. He was the nation’s No. 12-ranked wide receiver and was a standout in the U.S. Army All-American Bowl.

However, after arriving on campus at Ohio State, Scott never quite found the opportunity to crack the depth chart. He saw some time on special teams as a freshman and made five catches as a sophomore.

Now, as a third-year player, Gee Scott is set to make a massive impact at Ohio State.

Scott put on about 10/15 pounds of pure muscle and moved from the outside to the inside as a tight end. Although he will carry the ‘TE’ next to his name on the depth chart, the Buckeyes plan to use Scott in a variety of different ways. He will be a tight end by title, but will be used more in the flex ‘Y receiver’ position.

For Scott to combine his new-found size and position with his speed and agility is going to be a nightmare for opposing defenses. Especially if teams are dumb enough to mark him with a linebacker. It just won’t work.

Video of Scott during an offseason workout shows that he is going to be a force to be reckoned with. He moves ridiculously well for a 235-pounder.

And during a recent spring practice, he made one of the best plays of the year so far. Split out near the hashmarks, Scott blew by a cornerback, made a nasty cut to the inside and went up for a toe-tap touchdown catch in the back of the end zone.

This is how Gee Scott is moving at 235 lbs 👀 pic.twitter.com/7EgkwiMtWY

The team lost its mind.

so many things going on here 😂 pic.twitter.com/2nshwx5rhj

Gee Scott is a name to remember as Ohio State tries to right its wrongs from a year ago and return to the College Football Playoff. The dude is a freak.