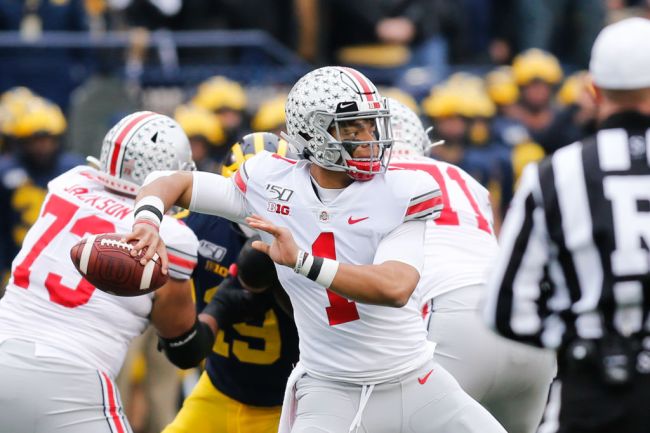 The worst-case scenario imaginable has become a reality for the Big Ten as Michigan announced on Tuesday that its game against Ohio State has been canceled due to an “increasing number” of positive COVID-19 cases within the Wolverine program.

Based on the rules the Big Ten set forth after backtracking and actually playing football this fall, this would mean that Ohio State wouldn’t be eligible to play in the conference championship game. Teams are required to play in at least six games to be eligible for the championship game and with this cancelation, the unbeaten Buckeyes will have only played in five unless it can find an opponent.

This is the third game OSU has had canceled this season with two of the three instances due to virus-related issues within the opponents’ program.

Literally every single college football fan pointed out the flaws with the Big Ten’s new rules and scheduling after it took its sweet time in deciding to have a football season this year. There was a very real chance that this exact situation could occur and low and behold it has.

If the Big Ten doesn’t change its rules and Buckeyes can’t find an opponent this would mean Ohio State would likely miss out on the College Football Playoff given the fact it had just five games under its belt and no conference title to its name.

It’s going to be quite the spectacle to watch the Big Ten try and spin this after falling on its face earlier in the year canceling the season and then deciding to play with its back against the wall and other Power Five conferences already in the middle of their seasons.

If Big Ten commissioner Kevin Warren wants to see a team from his conference play in the Playoff this year then he changes the rules for the Buckeyes’ sake.

It’s a lose-lose situation for Warren in doing so seeing as how he already royally messed up earlier this season and now he’d be making an off the cuff exception that will make a lot of people upset, but it would be the right thing to do in allowing Ohio State to find an opponent to reach six games.

Texas A&M had its game canceled against Ole Miss scheduled for this weekend. Who says no to No. 5 A&M taking on No. 4 Ohio State in an impromptu matchup?