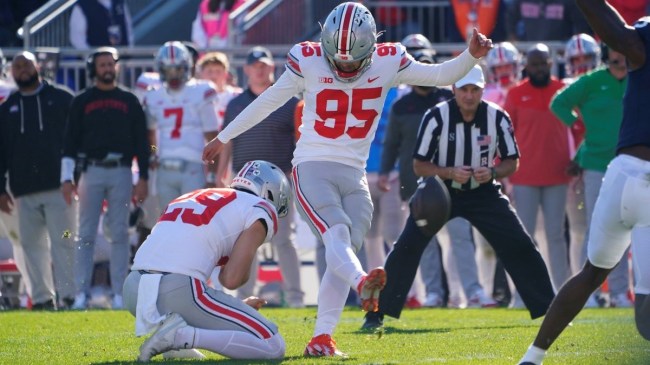 Ohio State’s perfect 8-0 record should be pretty safe against Northwestern on Saturday. The Wildcats are just 1-7 on the season and are massive 37.5-point underdogs against the Caesars Sportsbook.

But this is college football, and insane things happen every year on college football. Take, for instance, teams play in the middle of a gosh dang hurricane. Because that’s what could be the case for the Buckeyes and Wildcats on Saturday.

The forecast for the game in Evanston, Illinois projects an 80 percent chance of rain and gusts of up to 50 miles per hour rolling in off of Lake Michigan.

How bad was the wind in warmups? We’ll let Ohio State kicker Noah Ruggles give you an indication.

The wind for Ohio State vs Northwestern 😳
pic.twitter.com/TbdpUarVbg

Ruggles is one of the Big Ten’s best kickers. He’s 9-of-11 on the season after going 20-21 a year ago. But he’s very clearly no match for the insane forces of mother nature. The senior’s 39-yard field goal attempt in warmups wasn’t just knocked down, it looked like the ball hit a brick wall. His kick only just made it into the end zone before plummeting like a rock.

College football fans couldn’t believe what they were watching.

Even without stars such as TreVeyon Henderson and Jaxon Smith-Njigba due to injury, the Buckeyes still have far more firepower than Northwestern. But again, this is college football. A weird turnover here or there and some spooky wind-related mishaps and we could be talking about a potentially historic upset in the making.