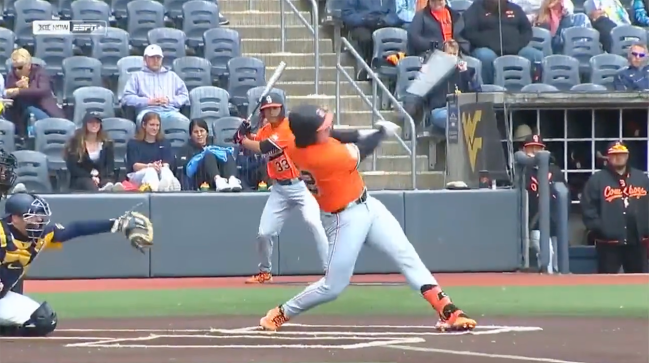 Oklahoma State baseball is on a tear. The Cowboys are 26-10 overall and recently earned the No. 3 ranking in the nation by D1 Baseball.

A big part of the impressive season is grad transfer first baseman Griffin Doersching. The beefy first baseman stands 6-foot-4, 251 pounds and spent the first four years at Northern Kentucky, where he led the Norse to national relevance with his big bat.

Although Doersching can get on base without touching them all, he is known for hitting dingers. He won the college baseball home run derby in 2019.

And then followed it up by winning the Northwoods Summer League Home Run Derby last summer. It’s what he does.

Now, at his second school, he is continuing the trend. Doersching hit a ball 500 feet with an exit velocity of 110 miles per hour and a launch angle of 30 degrees during the midweek last week.

On Sunday he followed it up with another massive tater. This time, it landed in a very unusual spot. If he was playing an arcade game, Doersching would have earned a bonus for hitting a moving car with his swing.

At West Virginia, where the Cowboys took two out of three from the Mountaineers over the weekend, a road is situated just beyond the left field fence. It is an active road and it is rather busy with a consistent amount of traffic.

Thus, when you drive by the baseball field, your car is always at risk. Especially when Doersching is at the dish.

The big slugger stepped up into the box in the first inning and sent a solo shot soaring to left. As Doersching viciously flipped his bat, the ball soared out of the park and nailed a moving car while in the air.

No car is safe with Doersching is batting. He and his bleached blonde hair spares no one.