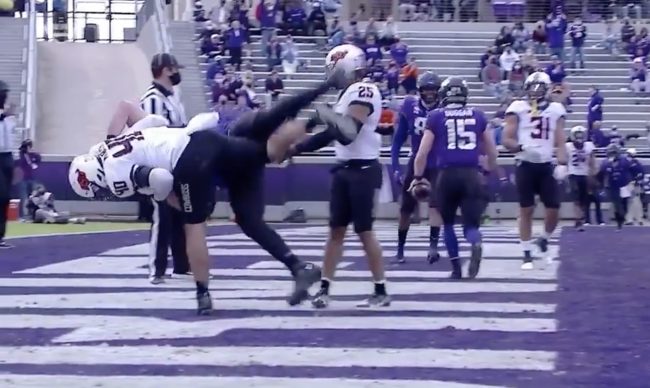 Oklahoma State defensive end Brock Martin is not a small person by any stretch of the imagination. The redshirt junior stands 6-foot-3, 240 pounds of pure muscle and would tower over the average human. However, when he is lined up on a football field, the size is outmatched by some of his gridiron counterparts.

On Saturday, as the Cowboys squared off with TCU, Martin was being marked by offensive line T.J. Storment late in the first half and had his way with the much larger opponent. The Horned Frogs left tackle stands 6-foot-7, 325-pounds and went to block the Cowboy at the goal line. He got a pretty good push, but may have kept driving just a little bit too long for Martin’s liking.

Martin, a two-time state champion wrestler and former Okla. State wrestling team standout (he was kept off of the team as an upperclassman to focus on football), grabbed Storment and threw him down with a textbook hip toss. For such a big guy to be tossed around with such ease like that must not have been a good feeling for the loser.

The move is called an ‘uchi mata throw,’ which is a Judo staple. It’s the most-used technique in the world at the international level, but it’s not easy to master. If you are unable to get your hips square to your opponent before you sweep, you lift up their leg with your leg. That is not the goal.

Instead, you want to plant the first foot slightly off of the line with your other foot and create a right-angle triangle.

From there, instead of lifting your leg, you want rotate the body and lift with your hip, throwing the opponent over top.

Martin executed the move to perfection and made Storment look silly.