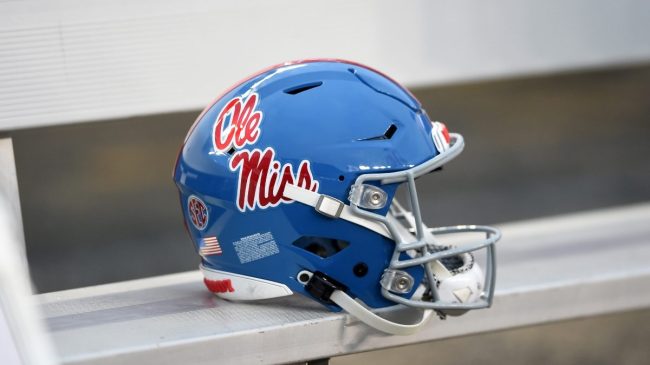 The Ole Miss Rebels looked like they were just trying to have a little fun during practice. While the team was having a random home run derby, defensive tackle Tywone Malone accidentally drills a coach in the throat with a ball. Even Lane Kiffin shared his immediate reaction.

As you can see, the Rebels are having a little post-practice fun. However, things take a turn quickly as Malone smokes a ball right at coach Michael Nysewander directly in the throat. Ole Miss players immediately rush over to check on him, as it looked incredibly painful. Give it a watch below.

.@CoachMikeBianco can you teach your guys how a home run derby works? Supposed to hit it deep not smoke @NYSEandeasy in the throat 🤦🏼 @OleMissFB @OleMissBSB pic.twitter.com/SsYX0P8KmX

The guy dropped like a sack of potatoes. It didn’t look good at all. However, it sounds like Nysewander is fine, as Lane Kiffin makes a light-hearted joke about it. However, as it turns out, Ole Miss defensive tackle Tywone Malone plays baseball for the Rebels. It’s no wonder why his swing looked so smooth as a big man. Now watch him hit an absolute bomb

He also hits absolute BOMBS for their baseball teampic.twitter.com/FUCMFGDTA1

After watching him nuke that baseball, I’m glad it wasn’t me who got drilled in the throat. Tywone Malone has some serious power on the football field and on the plate. We’re just glad that the Ole Miss coach is alright. Maybe next time he’ll wear some protective gear during the next random home run derby.