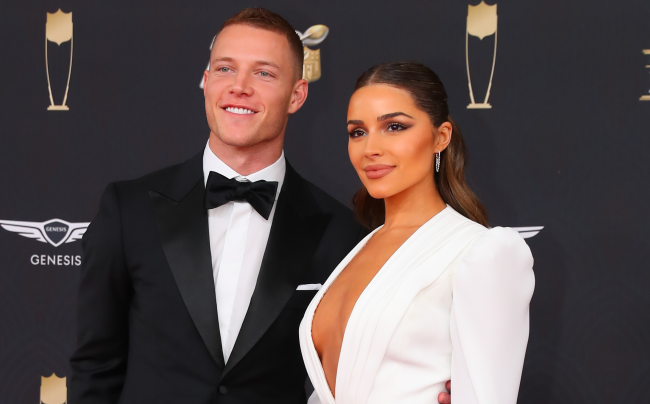 Today on Lifestyles of the Rich and Famous, 2012 Miss Universe Olivia Culpo ran into a little snag while preparing to board her flight to Cabo San Lucas with her NFL running back boyfriend Christian McCaffrey.

According to footage recorded by Olivia Culpo’s sister Aurora and shared on her Instagram stories, as they were about to get on the plane an American Airlines agent informed the model that she needed to put on a blouse or she would not be allowed to board the plane.

In the video shot by Aurora Culpo, who called the situation “f—ed up,” we see the 29-year-old pageant winner wearing some compression shorts, a sports bra, and a black cardigan sweater.

Rather than cause a scene, Olivia just borrowed her boyfriend Christian McCaffrey’s grey hoodie.

Her sister Aurora, however, wasn’t so chill and found another passenger about to board the flight who was wearing an outfit almost identical to Olivia’s and had not been asked to cover up.

“That’s weird,” the woman said to the camera, showing off her outfit.

Olivia later re-posted the video to her own Instagram stories with the caption, “Leave it to Aurora to cause a scene. Hide me.”

She also shared a photo of McCaffrey on the plane with his arms inside his t-shirt with the caption, “When you freeze bc ur lady dress inapproppate [sic] AF. Exactly how Jack from the Titanic died.”

Fans of the model (and many who are obviously not fans) were quick to jump on social media to express their opinions on the situation.

What year will we be done policing women’s bodies??? @AmericanAir @oliviaculpo pic.twitter.com/TLFEGnoje2

It’s kind of ridiculous to walk around in underwear, children in tantrums when they experience norms around modesty and civility.

A sports bra is not a top. It’s an undergarment, it’s in the name. 🙄

I've seen girls in bikinis on flights multiple times, especially to and from mexico, this seems way over the top. What airline was this?

She was literally just wearing underwear.

Airline policy, not new. Weird that supposedly another woman got away with it. At least Culpo doesn't seem to be making a huge deal about it.