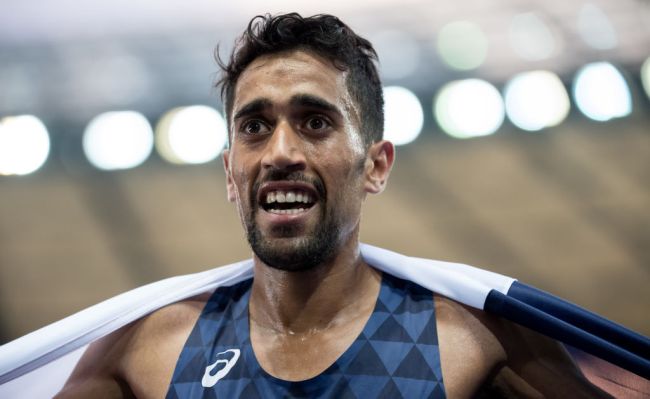 French marathon runner Morhad Amdouni is a total scumbag. The 33-year-old was competing in the Olympic men’s marathon on Sunday when he intentionally knocked over a row of water, grabbing only the very last one for himself.

Temperatures in Sapporo, Japan (where the race was held) climbed to 84 degrees during the 26-mile race. As a result, water was at a premium for the more than 100 starters.

Around the 17-mile mark, a pack of the runners approached a water station. Bottles were lined up in two rows, allowing them to grab and keep going.

As the group approached the table, Amdouni stuck out his right arm as he ran by and knocked over the front row like dominoes. After sending 20+ bottles to the ground, the Frenchman grabbed the only one remaining before continuing his treck.

Thoughts on Amdouni knocking over an entire row of water before taking the last one? pic.twitter.com/qrPaSzxLBW

On the broadcast, former track and field Olympian Tamsyn Manou said that he “thinks it is pretty hard to grab those drinks, but it’s not helpful to other athletes behind him.”

The justification for the Amdouni’s actions is questionable. It’s a pretty clear, deliberate move to stop his competitors from receiving proper hydration and most people online tend to agree.

No chance it was an accident. He very deliberately runs his hand along the table knocking over bottles for several seconds with no attempt to take one, then very deftly grabs the last one. Hr wasn’t delirious from heat, he ran another ~15k and finished 17th out of 100+ starters.

I’m fairly certain he wasn’t practicing a dominoes trick, there is only one reason he did that and he should hang his head in shame, hopefully upon reflection he will realize what a selfish act that was.

BS. This isn’t his first marathon. He knows how to pick up a water bottle or a cup. Can imagine knocking over a couple (5 max) but an entire row? No way that’s no deliberate. Poor sportsmanship.

Whether it was intentional or not (it was), Amdouni should be investigated. Fortunately for other runners behind the French villain, another water station was not too far ahead.

30 runners were forced to drop out of the race due to exhaustion and hydration issues, so Amdouni’s abhorrent act was about as abhorrent as it gets. He should never be allowed to compete in the event again.

Amdouni, rightfully, finished in 17th and without a medal. Karma always gets its way.