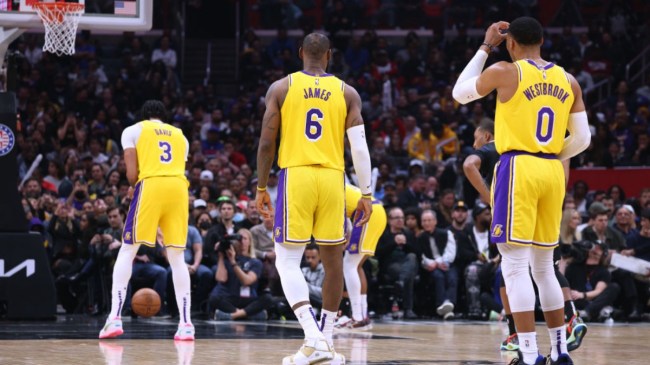 The Los Angeles Lakers are doing whatever they can to try and turn things around right now. The team has struggled to a 2-9 record to start the season and has badly needed a spark.

Their first attempt to turn things around came in the form of moving Russell Westbrook to the bench. The move has improved Westbrook’s play, with his scoring numbers and shooting percentages improving since the change.

While the Lakers have gotten both of their wins this season since making the switch, it hasn’t seemed to make them much more likely to turn into a playoff team this season.

That still doesn’t mean the move has been a complete waste. After struggling throughout the offseason to try and trade Russell Westbrook, Bleacher Report’s Chris Haynes is reporting that teams are now calling the Lakers to find out if Westbrook is available for a trade thanks to his improved performances coming off of the bench.

Inside the critical decisions for the Lakers, how it could prompt key players to sour on the direction of the franchise, and LeBron James’ unwillingness to stand pat and waste a season, league sources tell @BleacherReport: https://t.co/rn4cX9JGZ1

It would be quite the turn of events if the Lakers ended up being able to trade Westbrook without giving up a pick after how much they struggled to trade him this offseason.

Despite his improved play, trading Westbrook still appears to be the best course of action for the Lakers. The team still isn’t winning and Westbrook is still very expensive. Darvin Ham recently brought up the team’s cap situation when discussing the team’s struggles. Westbrook’s contract is a major contributor to that contract situation.

Maybe the Lakers will actually be able to make some moves during the season after struggling to do so over the summer.