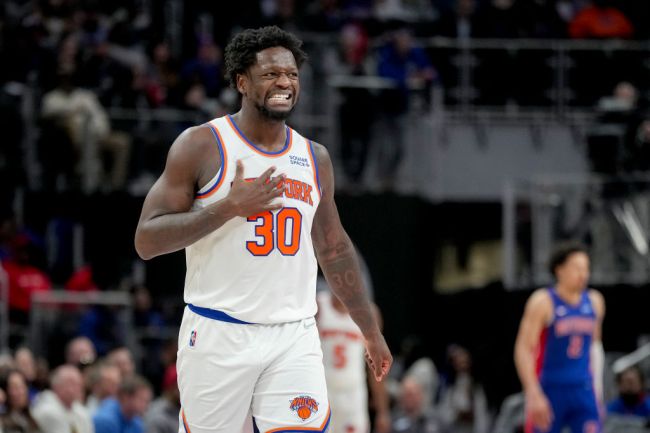 The New York Knicks have seemingly started to turn things around over the last week, winning 4 in a row while getting strong play from RJ Barrett and some of their other young players. It’s unfortunately a little bit too late in the season for it to matter this year, but it’s a good sign that they might be able to bounce back next year.

However, that bounce back might have to come without one of their stars. It is being reported that Julius Randle could be trying to force a trade away from the Knicks.

According to a New York Post report, Randle has been behaving like James Harden and distancing himself from his teammates as he seemingly tries to secure a trade away from New York.

At this point, Randle forcing a trade might not even be something Knicks fans would be upset about. Randle has been a massive disappointment this season after his breakout campaign last year that helped the Knicks to the playoffs.

Knicks fans and Randle’s teammates have even seemed to reach the point that they prefer to have Obi Toppin on the floor instead of Randle. Now, the question just becomes where exactly the Knicks could send Randle. Randle isn’t exactly an appealing asset.

All of Randle’s numbers have declined this season, including his shooting percentages dropping to 41.1% from the field and 30.5% from 3. That decline unfortunately comes right before his contract explodes.

Next season, Randle’s cap hit becomes $26,136,000 before eventually going over $30 million in years 3 and 4 of his most recent contract extension. It’s a hefty contract for any team to take on long-term, especially for a player who is no longer producing at an All-Star level.

The Knicks and Randle are going to have a tough time finding a trade partner unless they find somebody looking to offload a shorter, more expensive contract (like Russell Westbrook) or give up a pick to sweeten the deal.

Whatever it takes, the Knicks need to make it happen to move on from this mistake of a contract.