Oregon’s Duck Mascot Can’t Be In The Stadium, Continues His Touchdown Pushups From A Distance 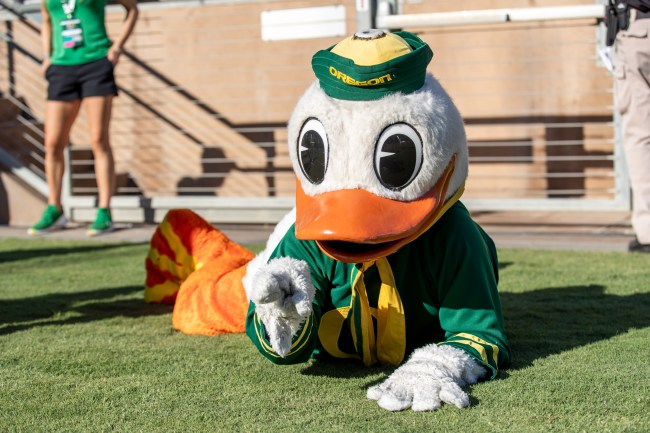 The Pac 12 was the last Power Five conference to return to play after the COVID-19 global pandemic cast a cloud of doubt over the 2020 college football season. It began a six-game, conference-only schedule on Nov. 11 and will not allow anyone in the stadium beyond the players, staff and essential game day employees. Of those not included in the authorized participants are the cheerleaders, the band and the mascot.

For Oregon, its Duck has found creative ways to keep the tradition rolling. Puddles, based on Disney’s Donald Duck character through a special licensing agreement, has tried his best to get into Autzen Stadium, but couldn’t break through the barriers.

stay tuned. i have a different… idea pic.twitter.com/nXKnecdUwe

For Oregon’s season-opener against Stanford, he had one of the best seats in the house, considering the lack of people in the stands. Posted up on a parking garage rooftop next to the field, he continued his tradition of doing pushups for every point. But when he ran out of snacks, he went home to cheer on his fellow waterfowl.

ran out of hot dogs.. live streaming the rest of the game from home, link in bio pic.twitter.com/MBmC8I5zA0

When Oregon went on the road to Pullman, Wash. in Week 2, Puddles wasn’t allowed to make the trip but kept on rolling with his favorite teddy bear.

Prior to Saturday’s matchup against UCLA, he had other ideas to get closer to the action.

snuck past the security guard on his lunch break yesterday… it’s been 16 hours and still nobody has seen me yet… i think imma make it to saturday… OVER pic.twitter.com/IWzVfIf45P

He crept his way onto the sideline and was ready to go, but he got caught and was asked to leave.

After being escorted out of the stadium on Friday, Puddles found himself a vantage point that was a little bit further than he might have liked.

As halftime hit, like most of us, he got hungry again. But not to worry… a Hawaiian pie was delivered just in time! Pineapple shouldn’t be allowed on pizza, but we’ll let it slide this time. A duck’s gotta eat!

Oregon took a 38-28 lead over UCLA in the third quarter and Puddles rushed home after getting cold to count ’em out.

was stuck in traffic, but im back pic.twitter.com/efxxCv5sHA

The Ducks had more than 15 minutes left to play when he arrived back home, so the pushups are sure to keep coming. We’re just glad that Puddles wasn’t placed on furlough.