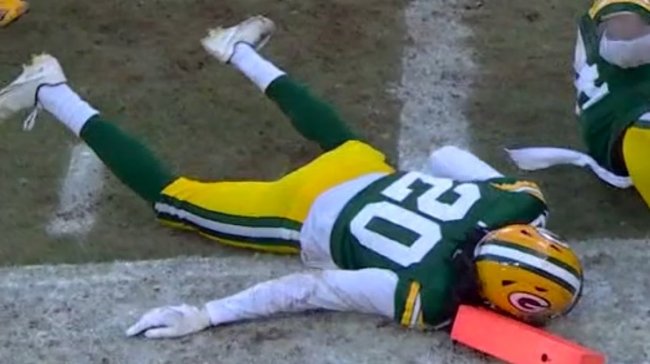 Tom Brady lit up the Packers defense in the first half of the NFC Championship game and recorded 202 yards and two touchdowns on 13 completions. Leonard Fournette added a third touchdown on the ground and the Buccaneers went into the locker room with a 21-7 lead.

The final score of the first 30 minutes came with less than two seconds left after Bruce Arians elected to go for it on fourth down with under 30 seconds remaining. Brady found Fournette to move the chains and Tampa Bay called a timeout with eight seconds remaining. On the next play, the final of the half, he found Scotty Miller with a step on his defender and connected with a dime.

TOM BRADY IS OUT OF HIS MIND 🎯pic.twitter.com/xxbNbLVhLT

Miller, a second-year player out of Bowling Green, has been a crucial component to a stacked wide receiver room as players like Chris Godwin and Mike Evans struggled to stay healthy throughout the season. His presence in the passing game has been less frequent, but equally as impactful. In this instance, he lined up on the left side of a bunch formation and streaked to the pylon, blowing by cornerback Kevin King for six. Blown-coverage touchdowns happen, but for King, Miller’s triumph capped a truly awful first half performance. He was on the losing end of all three Tampa touchdowns and got burnt badly. 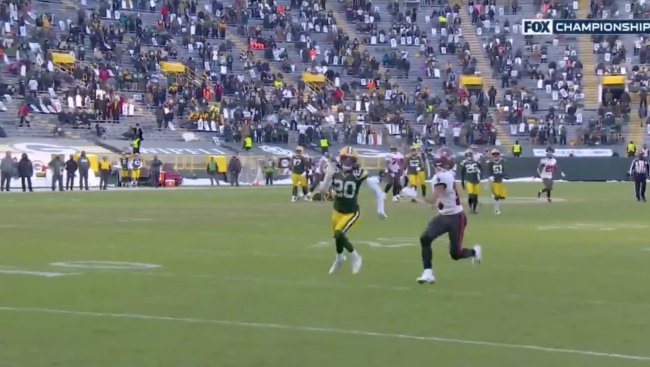 The first points of the game came on Evans’ 11th red zone score of the season. King was in coverage and put up one of the worst-timed jumps of all-time on the deflection attempt.

.@TomBrady to @MikeEvans13_ in the red zone: Automatic. #NFLPlayoffs #GoBucs

Look where the ball is while King is fully extended to try and defend it. Awful. 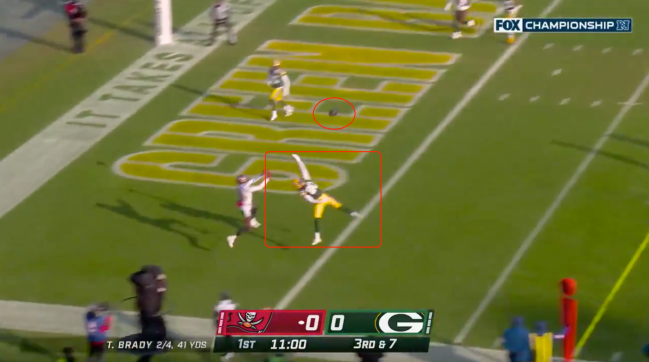 The game went to the second quarter at 7-0 and Green Bay tied it up quickly, but Fournette had other plans. He put together an incredible 20-yard touchdown run and a familiar face ended up on the losing end. The damage was already done, but King laid out at the goal line in hopes of stopping the 6-foot-0, 228-pound running back before he crossed the pylon. His efforts were unsuccessful and King ended up lying under Fournette as he barreled into the end zone.

A spin move and broken tackle by Leonard Fournette puts Tampa back on top! #NFLPlayoffs #GoBucs 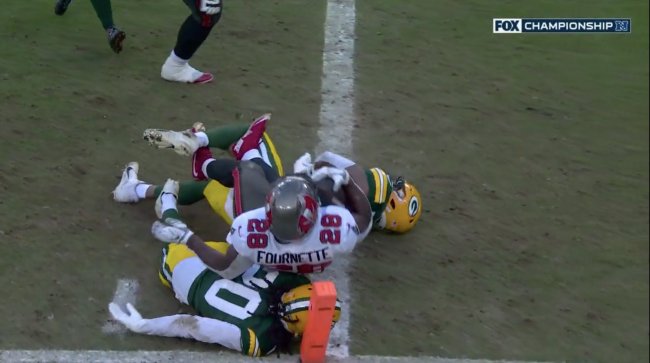 King couldn’t have strung together a performance that was much worse than it was if he tried. Naturally, the internet had a field day.

The one thing that’s hard for me to stomach is flagrant stupidity. There are 8 seconds left. How in God’s name does this dude Kevin King – No.20 on the @packers y’all — allow Scotty Miller to get BEHIND him. I mean…how DUMB can you be????

Kevin King somehow made it to my house pic.twitter.com/FZ9siC85Y5

Tom Brady and the Bucs WRs when they see Kevin King anywhere in coverage pic.twitter.com/GBxFMhWY6a

King is a fourth-year defensive back out of the University of Washington and was listed as questionable throughout the week. He was dealing with a back injury and was activated prior to the game. I am sure that many Green Bay fans wished he would have sat out.