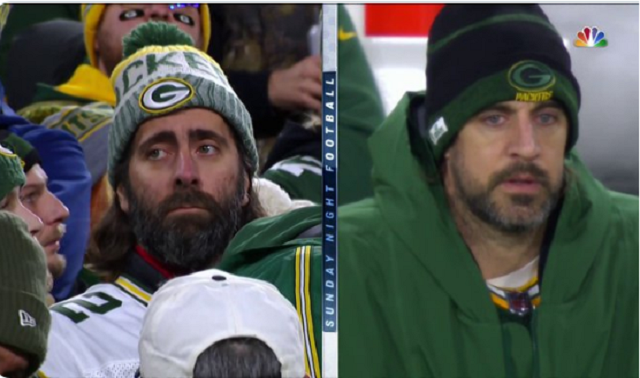 Apparently, there’s a Packers fan out there who is a dead ringer for Aaron Rodgers.

In the fourth quarter of Sunday night’s Packers-Bears game, NBC’s panned over to the crowd AT Lambeau field and found some dude who looked exactly like the Packers superstar QB.

NBC just showed this fan on the left in the Packers crowd. Dude looks exactly like Aaron Rodgers! Wonder how many places he gets in for free with that look? Does he buy a ticket or just walk in the players’ entrance? pic.twitter.com/gRndHjKlwM

Is this real life? @AaronRodgers12 pic.twitter.com/cFOwS95dXo

Of course, NFL fans had jokes about fake Rodgers.

The Bears suck so much that Rodgers has his clone beating them while he watches in the stands https://t.co/pvMv09bwcY

Aaron Rodgers sends this guy to his family events pic.twitter.com/3hozW2OyHW

The dude Rodgers sends in to get vaccinated for him. #SundayNightFootball pic.twitter.com/6hBzLOUxNo