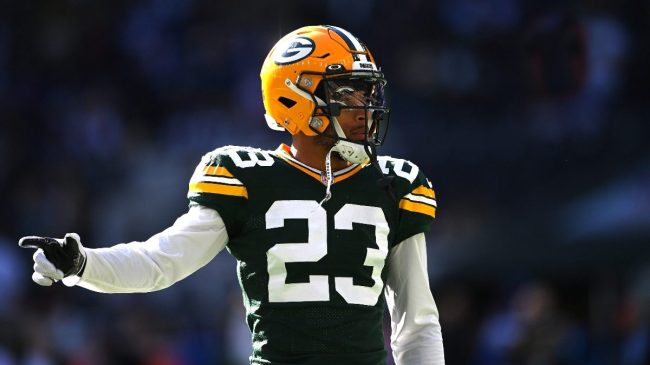 Things were heated in the pre-game as both Jaire Alexander and Stefon Diggs were seen exchanging words before kickoff. However, the Buffalo Bills wide receiver had the last laugh after his team took home the win. After the contest, Diggs continued trash-talking the Green Bay Packers cornerback. Now, Alexander responds.

Packers CB Jaire Alexander Doesn’t Back Down From Stefon Diggs

Diggs didn’t hold back in the postgame interview at all. He seemed fired up after the win and extremely pleased with his performance as well. However, things took a turn when a reporter asked the Bills receiver about who started the rivalry between him and Packers’ cornerback Jaire Alexander. Here’s his full answer.

"I don't give a f*** who started it, I finished it. I got the win." – Stefon Diggs on Jaire Alexander pic.twitter.com/Y2XxCXbZwh

Diggs has never been one to back down from a battle and clearly wants all of the smoke. For that reason, reporters asked Alexander for his thoughts on Stefon Diggs’ comments. At first, the Packers’ star seemed baffled, but then also claimed that he “finished it,” as well, per Matt Schneidman.

Jaire: "I don't know what he mean by that. I need more clarification."

Does Jaire know who started it?

What do you think of Diggs going back to his time in Minnesota?

"I mean, I always thought he was a decent receiver." https://t.co/4LdXHa4RcE

So, as it turns out, they each believe they “finished it.” Whatever that means. However, they’re both correct in their own right. Stefon Diggs had another strong performance and helped the Bills secure another win on the season. Meanwhile, Jaire Alexander was a lockdown cornerback once again. Additionally, anytime he covered Diggs, Josh Allen was unable to get his star receiver the ball.

At the end of the day, it appears we have a heated rivalry between these two superstars. Hopefully, we see them battle it out on the gridiron for years to come.