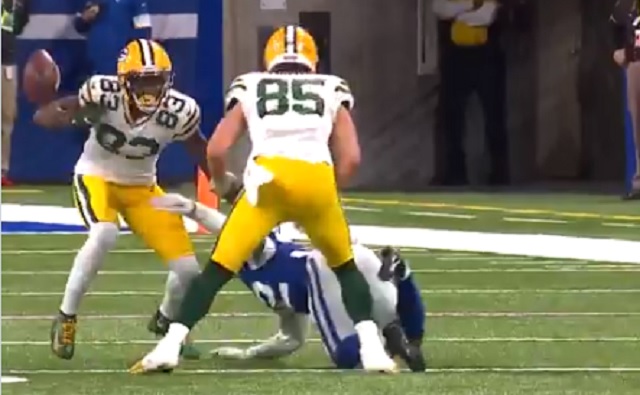 There are some fans out there who are absolutely horrible week in and week out.

On Sunday, Marquez Valdes-Scantling’s fumbled the ball in overtime that eventually led to the Indianapolis Colts kicking a game-winning field goal moments later.

Marquez Valdes-Scantling with a costly fumble 😬

Colts take over in OT

After the game Packers head coach Matt LaFleur spoke about the play and how Valdes-Scantling felt terrible for fumbling the ball.

“I know he’s really hurting right now,” Packers coach Matt LaFleur said after Sunday’s 34-31 loss. “He made so many plays for us and not only in the pass game but in the run game, stuff that you guys probably don’t even notice that we’re not getting the yardage that we get if he’s not blocking his ass off.

“So I can live with MVS. I’ve got more confidence in him now than probably ever. I think he continues to get better each and every day. Every time we go out there, he’s providing big plays.”

The Packers’ wide receiver would later reveal that some “sick” fans had sent him death threats over the result of the game.

Death threats over a football game? Jesus you people need help. It’s actually sick. I’m good. My team got my back. ✊🏾