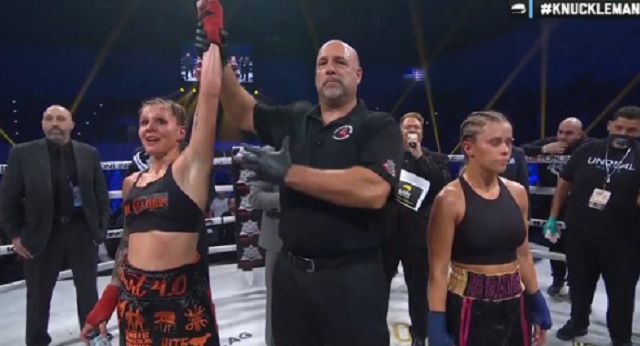 Back in August Paige VanZant shocked the MMA world when she announced she was signing an exclusive multi-fight contract with BKFC in August 2020 after her UFC contract expired.

On Friday PVZ made her highly anticipated Bare Knuckle debut against veteran Britain Hart and things didn’t go as planned for Paige.

For most of the fight, Paige looked uncomfortable in the BKFC ring as Hart used her length to keep her at bay.

Whenever Paige was able to get into the clinch she failed to capitalize and instead ended up in the wrong end of some combinations from Hart.

Paige eventually came around and landed some pretty big shots in the final round that rocked Hart.

While she didn’t win in her bare-knuckle debut, Paige did show promise in that final round when she finally got comfortable in the BKFC ring. Hopefully, PVZ can build off that fifth round whenever she returns to the ring.