Panthers Hold Impromptu Kicker Tryouts Minutes Before Kickoff After Injury, It Did Not Go Well 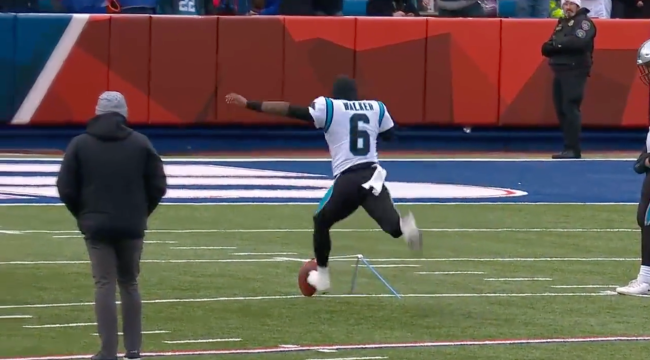 The Panthers are without their starting kicker during Sunday’s game against the Bills. As Zane Gonzalez went out to warm up in the 30-degree Buffalo weather, he suffered an injury that will rule him out.

While one might assume that punter Lachlan Edwards could take over the kicking duties, he is from Australia and did not grow up kicking field goals. He would have to drop kick.

Panthers lost their kicker in warmups so they have their punter attempting drop kicks for FG/conversions. #Bills #Panthers pic.twitter.com/20seWKIDUF

As a result, Carolina was forced to hold open kicker tryouts less than 30 minutes before kickoff. Among the players who were given a chance to show off their leg was wide receiver Brandon Zylstra, linebacker Frankie Luvu, running back Reggie Bonnafon and quarterback P.J. Walker.

Walker kicked some in high school and college, so he was one of the better options, but it still did not go well.

All of the emergency backup options gave kicking their best effort. However, they were not successful at all. It was really ugly.

Update: Panthers K Zane Gonzalez suffered an injury during pregame warm ups and is now OUT.

Our crew breaks down how Carolina will handle the kicking situation in today's game. pic.twitter.com/rqC3hZ6j3e

It is unclear who will be stepping into Gonzalez’s role, but it certainly seems like the Panthers will be going for it on fourth down more often than not. And, based on the video we saw from pregame, onside kickoffs are very much within the realm of possibility.

Buckle up, this is going to be interesting.