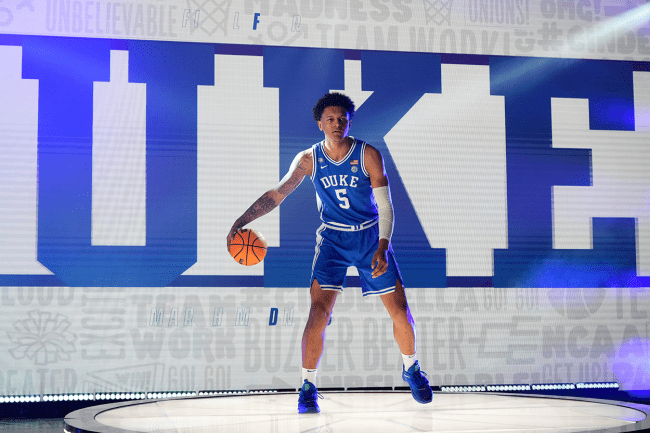 Paolo Banchero is not only competing in the Final Four, but he is well on his way to becoming a top-three pick in the NBA Draft. Despite his success on the hardwood, the 19-year-old Washington-native could have played his way to a D-I football scholarship if he had stuck with the sport.

As a 6-foot-8 freshman, Banchero’s only season of high school football was extremely impressive. He led O’Dea High School in Seattle to a state championship at quarterback and also played free safety.

His run-heavy team did not help inflate his stats, and he split time with a junior, but when he was in the game, Banchero was hard to bring down. He could beat you with both his arm and his feet.

Banchero’s high school football highlights tape is a lot of fun to watch and imagine what could have been. Take a look:

As an eighth grader, Banchero played in the FBU All-American Bowl in San Antonio and was believed by many to have the intangibles to develop into one of the top quarterbacks in the Class of 2021. Obviously, he went a different direction.

In Banchero’s one season of high school football, he played in 10 games and threw for 191 yards and three touchdowns on 15 completions with only one interception. He also ran for a touchdown and caught a pass.

Banchero’s father, Mario, played tight end at Washington and his mother, Rhonda, held Washington’s all-time scoring record for nine years and ranks third all-time in rebounds. She was also the first Husky to be selected to the WNBA.

No matter where he ended up, he would have been just fine. He has the genes.

Banchero ended up growing to 6-foot-10, 250 pounds, which would have made him the tallest quarterback in college football history. Instead, he is on his way to being a top pick in the NBA Draft and might leave his one year in college with a ring.