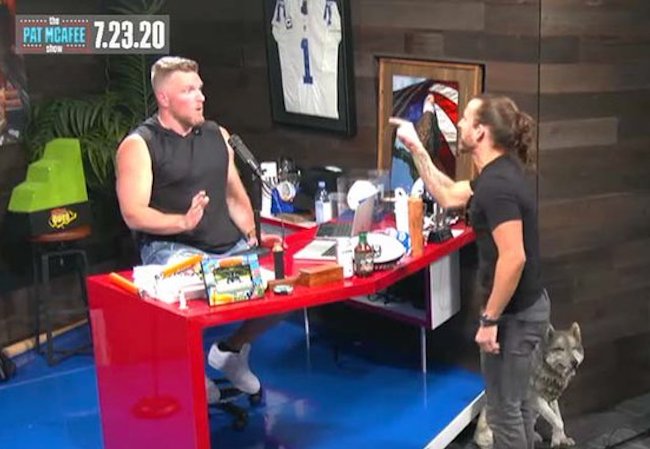 Cole was the surprise guest on the show. The pair have a history dating back to 2018 when the former NFL punter cost Cole a match against current WWE star Aleister Black.

Hindsight is always 20/20 but I obviously regret this DM.

He broke a mic, a headset, pushed @tyschmit, & stormed out of our office.

Pro Wrestling Sheet breaks down how things got out of hand:

During the interview … things start to get tense after Pat says Cole is nowhere near HBK when it comes to people comparing them, but that it has to feel good since he has respect for Shawn.

Cole laughs at the way the question was worded and says he plans to be the first Adam Cole, not the second coming of Shawn Michaels. Pat says he wasn’t trying to offend since Adam looked annoyed, to which the WWE star replies, “You can say you’re not trying to offend me, but it is offensive what you are saying.”

McAfee kept poking at Cole, saying the former NXT champion is only successful because Cole always had the Undisputed Era helping out and interfering in his matches. Adam Cole’s held the NXT Championship for 396 days before losing it to Keith Lee at “The Great American Bash” in early July.

Cole fires back at McAfee for being a punter and making his living off the backs of other players.

“And I find it so ironic, that of all people to say that I surrounded myself with really great talent and that’s the reason I succeeded, of all people you? What, a punter? You being on a team that literally did everything. You just happened to kick a football every now and then. And all of a sudden you feel like you’re really, really important. Of all people to say that to me. That I surround myself with super talented people and that’s the only reason that I was successful. You’re a psycho.”

McAfee points out that he was named to the NFL All-Decade Team and then refers to Cole as “kind of small.”

At that point, Cole goes off.

It needs to be noted that Cole is billed as being 6’0″. (insert wink emoji)

There’s a good chance this blow-up was a work. I don’t care if it was or wasn’t planned, I want more WWE and NXT stars blowing up in interviews and podcasts.

Nothing pisses me off more than heels being heels on WWE programming and then being Mr. or Mrs. Good Time on “The Today Show”, Food Network, or wherever the hell else wrestlers show up to promote WWE.

Here is the complete show and interview. The altercation starts around the 2 hours and 7-minute mark.