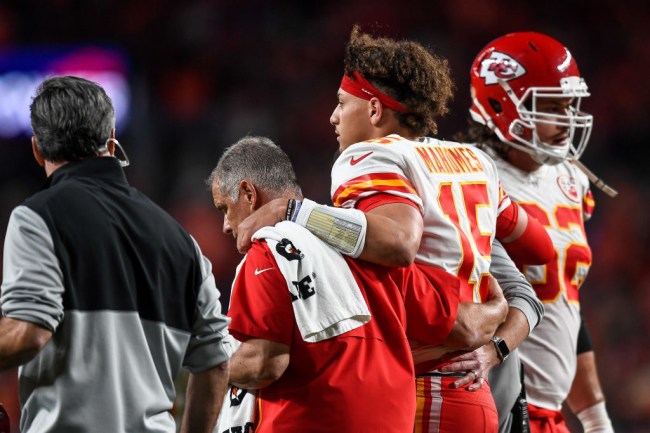 Chiefs quarterback Patrick Mahomes had to leave the field during the second quarter of Thursday night’s contest against the Broncos after injuring his knee.

Here’s what happened to Patrick Mahomes. End of clip shows him walking off. pic.twitter.com/wS8BbjE2bs

Moments after the play, the broadcast caught doctors having to actually pop Mahomes’ kneecap back into place, which if you’re grossed out by stuff like that you may not want to watch. How bad was it? Well, Travis Kelce told reporters “his knee didn’t even look like a knee. It was all out of whack. I couldn’t even describe it.”

Patrick Mahomes knee gets popped back into place after injury and he starts walking pic.twitter.com/AfSt9XPro7

Mahomes did not return to the game, which Kansas City won 30-6, and the initial reaction and unofficial diagnosis of the injury does not sound good.

Dr. David Chao – Pro Football Doc on Twitter – points out that the injury is indeed patella dislocation; Dr. Chao was the San Diego Chargers’ team doctor for 17 years. While the kneecap was visibly popped back into place, we’ll all know more after Mahomes undergoes an MRI on Friday.

Pro Football Doc went more in-depth in his suggested diagnosis and stated on his website that this sort of injury typically needs surgery and if surgery is the route he and the team takes, he could be sidelined for at least six months.

“With the patella dislocation now confirmed, the player and team have a big decision to make. Typically the medial patellofemoral ligament (MPFL) is torn and is best repaired with surgery. Yes, one can try to rehab and play through the season after about a month but will it be worth it? Matthew Stafford suffered a similar injury in 2009 and finished season after three weeks off but later had surgery. They are two very different players and the injury will affect both quarterbacks differently.

Mahomes would likely have to modify his game. There is a high risk of re-dislocation or subluxation (shifting) given his mobility. The biggest fear is if he knocks off some articular cartilage with the next re-injury and that could affect his long term career. My best guess is that the Chiefs will think hard on the decision to take the safer route and have surgery now to protect their star long term. Surgery means a minimum six to nine month recovery.”

Again, we’ll all likely hear more official news about the injury at some point on Friday, but if Chao’s diagnosis is correct it sounds like a rather brutal injury that could keep Mahomes off the field well into 2020.

Early Thursday morning Ian Rapoport reported that Mahomes will be out at least three weeks and the MRI will tell Mahomes and the team much more information about what exactly they are dealing with.

Heading into the all-important MRI today, here is where it stands for #Chiefs QB Patrick Mahomes: He’s expected to be out at least three weeks with a dislocated kneecap, but there is some real optimism from those involved that he can play through the ailment after that.